2022 will be a good year for cyclical and value stocks: Agilith Capital’s Patrick Horan

Technology shares that led last week’s decline paced the rebound. The Nasdaq 100 Index surged 3 per cent, an ETF that tracks newly public companies jumped 5 per cent and small caps climbed 2 per cent. The S&P 500 erased all the losses suffered after Jerome Powell’s hawkish tilt a week ago and was just 0.3 per cent below its last close before the omicron variant rocked markets. The Cboe Volatility Index plunged five points to 22. The dollar dipped and crude rose above US$71 a barrel in New York.

Risk assets are recovering this week after initial data showed the surge in omicron cases hasn’t overwhelmed hospitals and as China moved to expand support for the economy. Among the riskiest assets, a Goldman Sachs Group Inc. basket of non-profitable tech firms jumped nearly 6 per cent Tuesday, clawing back almost half of last week’s losses. 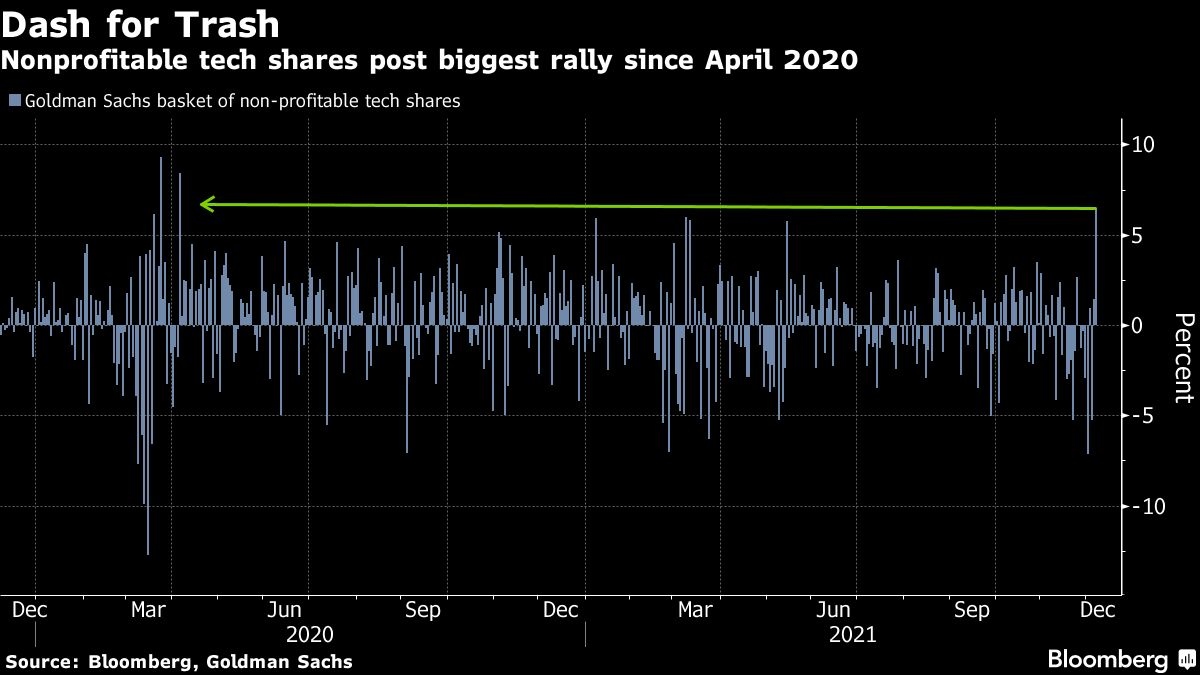 “The market mood has been notably more upbeat this week after several health experts across the globe, including the U.S.’s Dr. Anthony Fauci, have said omicron symptoms appear milder, so far,” said Fiona Cincotta, senior financial markets analyst at City Index. “Whilst it is still early days, the encouraging news sparked bargain hunters into action. Who would want to miss out on the possibility that a milder variant could accelerate natural immunity to COVID?”

On the data front, the U.S. trade deficit narrowed while third quarter productivity fell. Private consumption was the largest contributor to the euro area’s most recent economic expansion. U.K. house prices hit an all-time high. And China’s exports grew faster than expected to a record on external demand and an easing power crunch.

Additionally, research showed that a COVID-19 vaccine from GlaxoSmithKline Plc and Canada’s Medicago Inc. was effective against multiple variants of the disease. Congress also reached a deal to raise the nation’s debt ceiling.

“This morning’s rally is being fueled by the belief that the omicron variant will not create many problems for the global economy and that China has pledged measures to support economic growth,” said Matt Maley, chief market strategist for Miller Tabak + Co. “If those were the reasons why the market has seen such a big increase in volatility since Thanksgiving, we’d agree the worst is likely over and that investors should jump back into the market with both feet.”

However, equity markets could still be in for further turbulence amid new restrictions to stem the spread of omicron and resurfacing geopolitical tensions. The threat of sanctions still loom if Russia invades Ukraine, following a call between U.S. and Russian leaders Tuesday. China threatened the U.S. with retaliation against its decision to declare a diplomatic boycott of the Winter Olympics. And Treasury Secretary Janet Yellen said that U.S. reliance on foreign supply chains has proved a vulnerability, boosting policies that may be considered protectionist.

“Mostly this just feels like a counter-trend move after some big negative catalysts and sentiment challenges hit the market over the past couple of weeks, but I’m surprised it’s as large as it is,” he said.