Dip buyers emerged a day after a tumultuous trading session, driving stocks to their biggest rally since March.

The S&P 500 almost erased its Monday’s slide as traders shrugged off concern that the coronavirus resurgence would curtail the economic recovery. Cyclical companies, which got pummeled during the selloff, were the ones leading gains on Tuesday. A gauge of small caps climbed about 3 per cent. For several investors, the recent rout was just another buying opportunity in an environment of solid corporate earnings, government stimulus and ultra-easy monetary policy.

In fact, it was during Monday’s selloff that BNY Mellon Wealth Management’s Alicia Levine said she got out her “shopping list.” 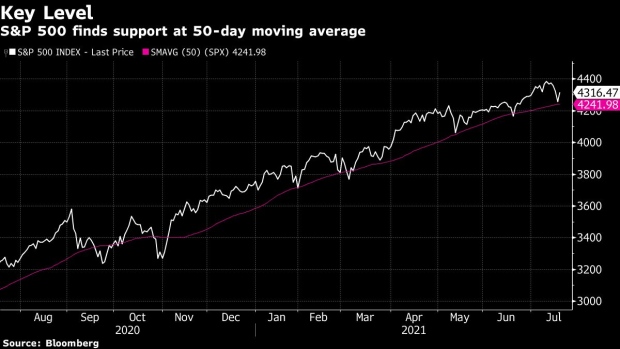 Levine said in a Bloomberg TV and Radio interview that she remains “very bullish” on stocks. For Bill Callahan, an investment strategist at Schroders, “equities just make sense right now,” and dip buyers will be rewarded as the market continues to grind higher.

Elsewhere, Bitcoin dropped below US$30,000 for the first time in about a month. Some traders view that level as a key support that could open the way to more losses.