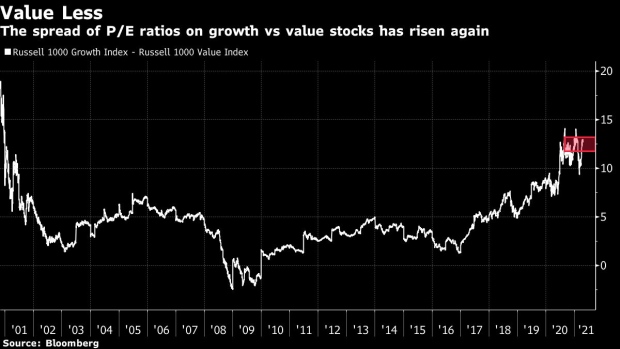 A person in a vehicle arrives to receive a dose of the Pfizer-BioNTech Covid-19 Vaccine at a mass vaccination site at The Forum arena in Inglewood, California, U.S. , Photographer: Eric Thayer/Bloomberg

(Bloomberg) -- Early signs are emerging that the U.S. stock market rotation into cyclicals and out of big tech still has room to run.

The reopening trade has lagged for weeks and it’s been the topic of fierce debate among equity strategists. Last week, smallcaps beat tech for the first time in about a month, and the trade looks sets to continue once again on Monday. Evercore ISI and Fundstrat Global Advisors LLC are urging clients to buy stocks tied to the economic recovery.

The U.S. economy is reaping the rewards of a fast vaccine rollout, with about 42% of the population having had at least one dose. Economists have raised growth estimates, and there’s every sign that life is returning to normal for millions of Americans.

On Monday, futures on the Russell 2000 Index of smallcap shares added 0.5%, versus a 0.2% drop for contracts on the tech-heavy Nasdaq 100 Index.

“The ‘epicenter trade’ is coming back on strong” as U.S. cases drop, said Tom Lee, co-founder of Fundstrat Global Advisors LLC, in a note Friday, referring to stocks that suffered most at the start of the pandemic. He suggested buying small-cap stocks, energy shares and the Invesco S&P 500 High Beta exchange-traded fund.

That sentiment was echoed by JPMorgan Chase & Co. strategists including Dubravko Lakos-Bujas and Marko Kolanovic. “Higher yields should drive another rotation back into reopening and epicenter plays,” they said.

Marko Kolanovic Says Markets May Be at Long-Term Turning Point

Not all Wall Street strategists agree. Some have argued that the time for big gains on reopening trades is over, and defensives are likely to shine when the economy starts to cool. In a recent note, Goldman Sachs Group Inc. analysts argued that sectors such as utilities are poised to benefit as growth moderates.