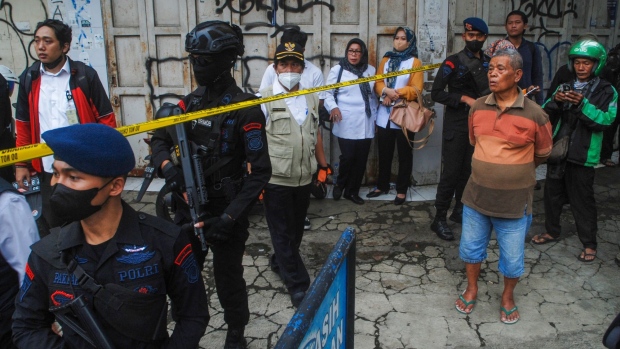 (Bloomberg) -- A suicide bomber in Indonesia targeted a police station that killed an officer and injured several people, suspected to be out of spite that law enforcers are cracking down on acts of terrorism.

The perpetrator, who has been identified as Agus Sujatno, struck the police station in West Java’s capital Bandung at 8:20am local time, said National Police Chief Listyo Sigit Prabowo on Wednesday. Sujatno died in the attack, which killed one officer while injuring nine other officers and a civilian.

Sujatno was released from prison last year after serving a four-year sentence on charges of terrorist funding and making explosives that were used in a 2017 attack on a municipal building in Bandung. His motive may have been related to the terrorism crackdown, the national counter terrorism agency said at a briefing reported by local newspaper Tempo. He may be acting on his own, according to preliminary investigations.

Earlier, West Java city police chief Aswin Sipayung told reporters that a man wielded a sharp weapon while trying to get into the Astana Anyar police station before detonating a device.

Indonesia has long suffered from acts of terrorism carried out by suicide bombers from Islamist militant groups and has stepped up raids against terror suspects since major incidents such as the 2002 Bali bombings, as well as 2009 attacks at Jakarta’s JW Marriott and Ritz-Carlton hotels. Police officers have been targeted in such attacks.

--With assistance from Norman Harsono.