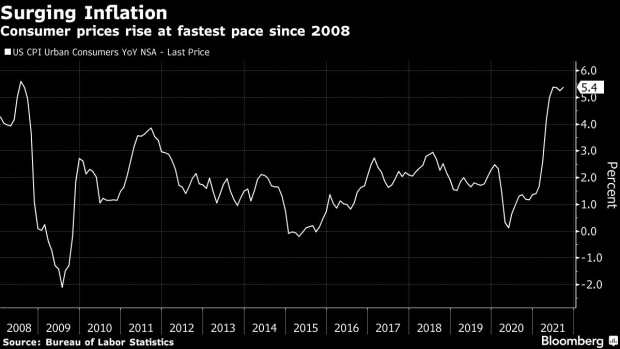 (Bloomberg) -- Former Treasury Secretary Lawrence Summers castigated monetary policy makers in the U.S. and elsewhere for paying too much attention to social issues and not enough to the biggest risk to inflation since the 1970s.

Speaking to a virtual conference organized by the Institute of International Finance, Summers compared the arguments by the Federal Reserve and other central banks downplaying the risk of inflation to those made by former Fed chairs Arthur Burns and G. William Miller, who presided over the central bank in the 1970s when the annual pace of price rises often topped 10%.

“We’re in more danger than we’ve been during my career of losing control of inflation in the U.S.,” the 66-year-old Summers, a paid contributor to Bloomberg, said. “We’ve gone even further towards losing it in Britain and I think we’re at some risk in Europe.”

Fed policy makers last year adopted a more inclusive approach toward their goal of achieving maximum employment, going well beyond the headline unemployment rate. They have pledged to keep their benchmark interest rate near zero even as inflation surges, committing to ensure greater progress in the job market.

Central bankers have also been increasingly discussing incorporating climate-change concerns into their work.

Summers spoke hours after a Labor Department report showed U.S. consumer prices rose by 5.4% in September from a year earlier, matching the largest annual gain since 2008. Summers said the data made him “more worried” about the inflation outlook.

Fed policy makers have largely stuck to a narrative that the surge in inflation this year will pass as pandemic-induced supply-chain bottlenecks ease.

Summers ticked off a number of reasons for what he called his “very considerable concern,” including ultra-lax monetary policy, surging house prices, a big federal budget deficit and excess household savings.

He blamed the Fed and other central banks for not preparing investors for the tough steps policy makers will probably have to take to rein in inflation.

“If those actions come, they’re going to be very shocking and very painful in financial markets,” he said.