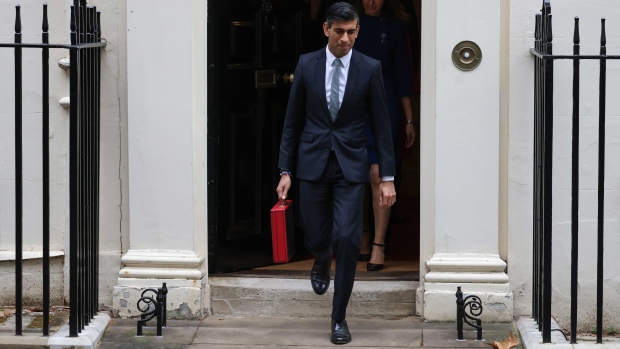 Rishi Sunak pledged to boost funding for every government department and help working families struggling with the cost of living crisis as he set out a U.K. budget that aimed to look beyond the Covid-19 pandemic.

The chancellor of the exchequer sought to raise the national spirits by declaring his budget as preparing for a “new economy” post-Covid and “a new age of optimism.” He began his speech flagging higher employment, better public services, rising wages and public finances that are stabilizing.

And he went on to announce cuts to levies on alcoholic drinks, including a 5% reduction in tax on draft beer and cider. He also announced a one-year, 50% discount on taxes for the hospitality and retail industries that were battered by the pandemic lockdowns.

Sunak announced tens of billions of pounds of investment in infrastructure, education and skills as well as several measures to help Britons struggling with the rising cost of living. But he also warned of the need to build up a financial buffer in case of future economic shocks, despite a significant improvement in the outlook for the British economy.

“We need to strengthen our public finances so that when the next crisis comes, we have the fiscal space to act,” Sunak said told the House of Commons. He also said the country hasn’t yet turned the corner on infections, warning of “challenging months ahead.”

Sunak’s firepower was boosted by a significantly improved outlook for the British economy from the Office for Budget Responsibility, the government’s independent fiscal watchdog. It revised upwards its forecast for growth this year to 6.5% from 4%, and downwards its forecast for the long-term economic scarring caused by the pandemic to 2% of output from 3%.

In the run-up to the budget and spending review, the Treasury pre-announced about 31 billion pounds ($43 billion) of spending on everything from health care and border security to theaters, sports facilities and repurposing brownfield land. But delivering the budget alongside a three-year spending review, Sunak’s message on Wednesday was for restraint.

The chancellor signaled the need to repair the country’s finances after racking up hundreds of billions of extra debt to protect workers and businesses through the pandemic. Unveiling new fiscal rules that will guide his approach to rebuilding the economy from its worst recession in a century, he vowed that in “normal times,” the government would only borrow to invest and that underlying public sector net debt must be falling as a percentage of output.

With inflation already well above the Bank of England’s 2% target and forecast to rise to at least double that, it’s already raising the cost of repaying the country’s debt, a quarter of which is linked to inflation indexes. Sunak also faces the prospect of an interest-rate hike that would add to borrowing costs: For every percentage point that interest rates go up, the Treasury estimates it would cost an extra 23 billion pounds a year.

By moderating government spending Sunak is ensuring the ruling Conservatives have financial ammunition to bring in electorate-pleasing tax cuts in advance of a general election that must be held in 2024 at the latest, but that many in Westminster say could be called earlier. His budget on Wednesday also included some important measures to soften the blow of the rising cost of living on ordinary Britons.

One surprise was Sunak’s pledge to increase foreign aid spending to 0.7% of economic output by 2024-25, just a year after announcing a cut to 0.5%. That cut broke a manifesto pledge and was condemned by all five living former British prime ministers.