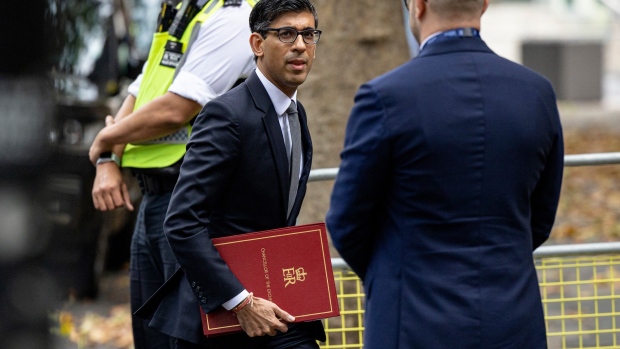 LONDON, ENGLAND - OCTOBER 19: Chancellor of the Exchequer Rishi Sunak arrives at the Science Museum on October 19, 2021 in London, England. The summit brought together British politicians, royalty, CEOs of the world's biggest banks and other business leaders with the aim of highlighting how the UK is "using investment to cement itself as a science and tech superpower, and a pioneer of green technology ahead of COP26," according to the country's international trade secretary. (Photo by Rob Pinney/Getty Images) , Photographer: Rob Pinney/Getty Images Europe

(Bloomberg) -- Chancellor of the Exchequer Rishi Sunak will pledge to deliver a local transport “revolution” when he delivers the U.K. budget next week, plowing billions of pounds into train, bus and tram networks as part of government plans to spread prosperity beyond London and the southeast.

City regions will get settlements totaling 5.7 billion pounds ($7.8 billion) to cover projects such as tram improvements in Greater Manchester, the West Midlands and Sheffield, the Treasury announced on Saturday. Another 1.2 billion pounds will boost bus services, delivering “London-style improvements in infrastructure, fares and services,” it said.

The largess is part of the government’s plan to “level up” opportunities by spending on amenities outside the capital. Politically, it’s also likely to help the ruling Conservatives retain the support of former Labour voters from so-called “Red Wall” seats in central and northern England who switched to the Tories at the 2019 general election.

“Great cities need great transport and that is why we’re investing billions to improve connections in our city regions,” Sunak said. “There is no reason why somebody working in the North and Midlands should have to wait several times longer for their bus or train to arrive in the morning compared to a commuter in the capital. This transport revolution will help redress that imbalance.”

Not all of the spending is new, with the money for buses counting toward the 3 billion pounds already pledged by Prime Minister Boris Johnson to improve bus services. “Places will be selected in the coming months to benefit from this investment,” the Treasury said.