Sustainable investing is exploding in Canada as the coronavirus and an anti-racism movement highlight long-standing social inequalities.

Net inflows into Canadian exchange-traded funds that track companies focusing on environmental, social and governance factors has surged to $740 million. That has already outstripped the $200 million invested in 2018 and the $142 million last year, excluding seed capital, according to TD Securities Inc. With 15 new ESG products launched in Canada this year, investors now have 38 ETFs focused on impact investing to choose from.

“In a time where the conscious investor is experiencing and observing a great deal of social and economic change, funds that provide exposure to companies that are aware of the environmental, social, and governance impact of their businesses have increased in popularity,” said TD analyst Andres Rincon. 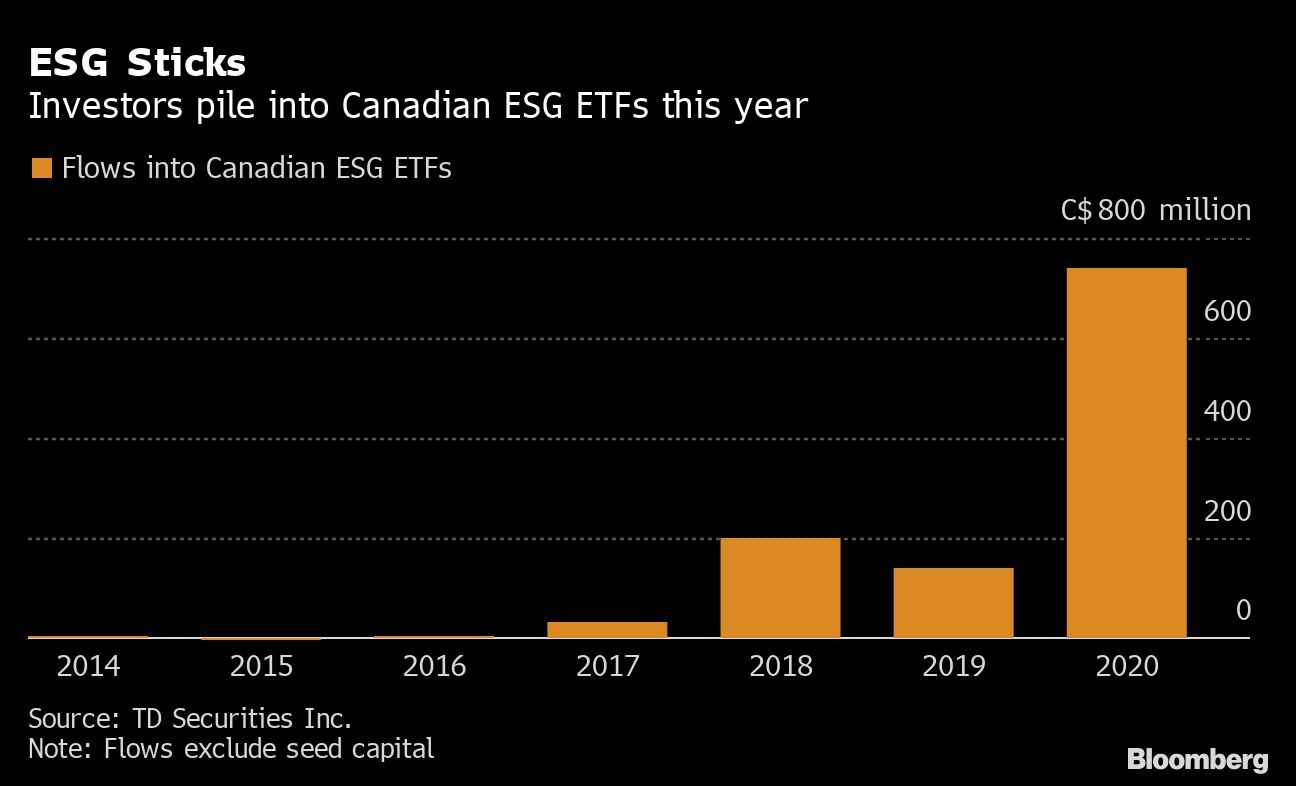 COVID-19 has hit the weakest and lowest-paid the hardest, and investors are taking a closer look at how companies pay and treat workers, community engagement and support during the outbreak and whether corporations have been agile enough to rework their manufacturing facilities to make personal protection equipment.

Global protests on systemic racism are also shining a light on the stark difference in companies’ diversity efforts. Both are bringing the ‘S’ in ESG investing front and cente.

“The pandemic has reinforced the importance of taking ESG into consideration when assessing corporate strategy, operational risks and competitive positioning,” said Bloomberg Intelligence analyst Adeline Diab during a live Bloomberg Q&A on ESG investing this week.

And despite a rout at the end of the first quarter that saw global stock markets plunge on coronavirus concerns, ESG ETFs in Canada saw “great momentum in their asset-gathering potential,” signaling that investors are sticking to their bets on social and responsible investing, said Rincon.

ESG flows worldwide have been mimicking gold, acting as a haven in times of market upheaval, Diab said during the Q&A. The vehicles may even increasingly be considered an alternative to low-volatility strategies in a market downturn, according to a report she published in April.

“Although COVID-19 is not yet in the rear-view mirror, it is fair to say that the pandemic has further cemented a loyal base of investors in ESG ETFs and has increased the legitimacy of responsible investing,” Rincon said.

Here’s what happened in Canada this week.

• The S&P/TSX Composite index climbed 1.4 per cent this week with tech and health-care stocks posting the biggest gains.

• Shopify Inc.’s surge continued with a 19-per-cent gain amid an announcement that it teamed up with BlackBerry and the Canadian government on a contact tracing app. Shopify’s biggest equity bull also said its stock could rally to US$1,000.

• Bausch Health Cos jumped 17 per cent this week as HC Wainwright raised its U.S.-listed share price target by 28 per cent.

• Foreign investors mopped up the flood of new issuance by Canadian governments and companies, a sign the nation continues to be viewed a safe haven. Investors from outside the country bought a net $49 billion of Canadian securities in April, the largest monthly purchases from abroad on record.

• The Canadian dollar weakened 0.2 per cent against the greenback on the week. 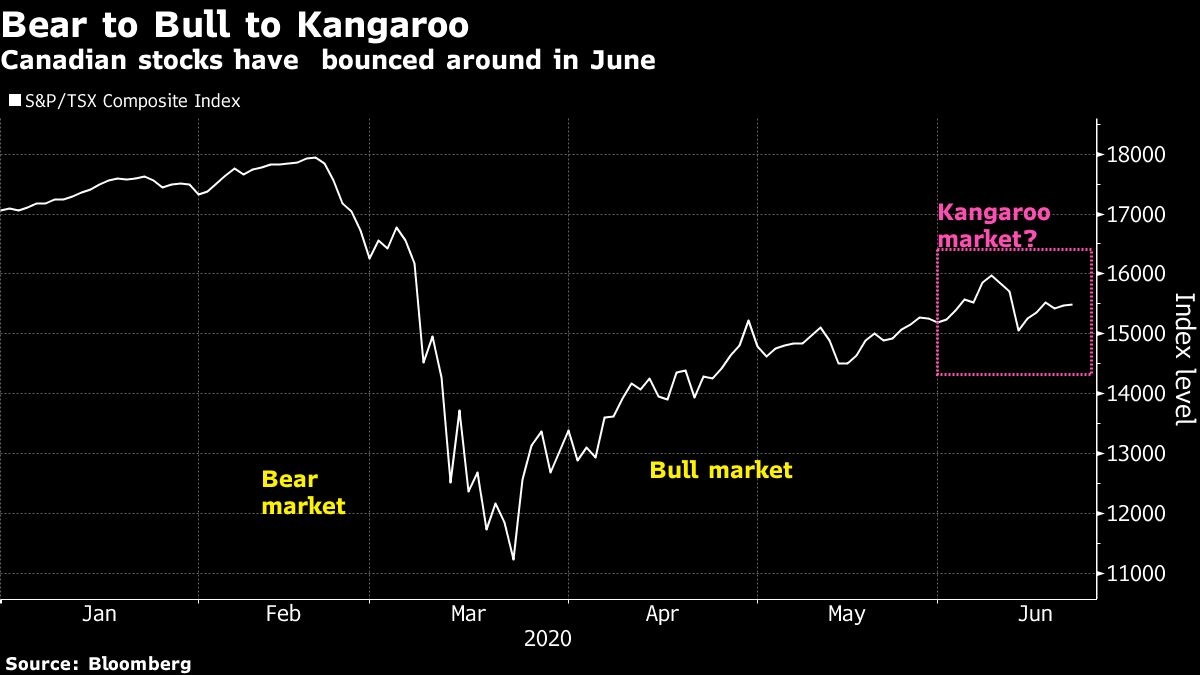 Canadian retail sales posted a historic drop in April, falling 26 per cent during a full month of business closures and strict physical distancing measures, though sales rebounded in May based on preliminary data.

Inflation moved further into negative territory as Canada’s retail stores began to reopen from the COVID-19 lockdowns with discounts to entice shoppers. The consumer price index fell 0.4 per cent from the same month a year earlier. That compares with a 0.2-per-cent drop in April

Bank of Canada Governor Tiff Macklem said a full recovery is a long way off for the country’s economy, requiring interest rates to remain at historical lows indefinitely. Speaking in his first public appearance since taking the helm at the central bank on June 3, Macklem said the biggest risk to the country’s outlook is that the policy response would be too weak, unnecessarily prolonging the crisis.

Canadian home sales saw a 57-per-cent increase in May from the prior month. Transactions for existing properties reached 26,111 in the month, still down 40 per cent from a year earlier and at the lowest level for May since 1996.

Prime Minister Justin Trudeau has faced the perfect storm this week as Canada’s tension with China kicks up a notch.

Chinese authorities have indicted two Canadians on spying allegations, pressing ahead with a case diplomatically entwined with U.S. efforts to extradite a top Huawei Technologies Co. executive from Canada.

Canadian officials are also investigating after China said it discovered pests in shipments of hardwood and softwood. The move comes three weeks after a judge ruled that extradition proceedings may continue against Huawei’s chief financial officer Meng Wanzhou and is raising concerns the pest issue may be politically-motivated.

—With assistance from Michael Bellusci and Aoyon Ashraf