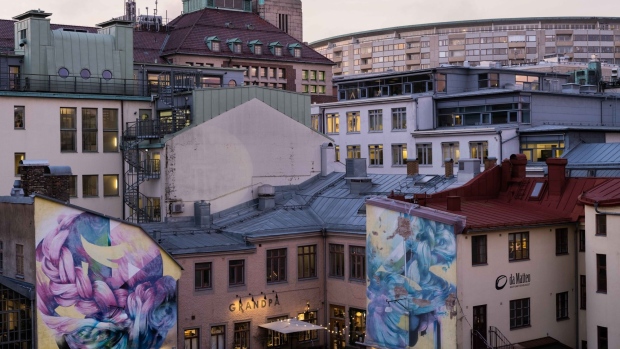 Electric lights on in homes and businesses at dusk in Gothenburg, Sweden, on Thursday, Jan. 13, 2022. The Swedish government set aside 6 billion kronor ($664 million) to lessen the impact of soaring power bills on households, saying Russia’s approach to supplying gas to Europe this winter was a major factor in stoking costs last month. , Bloomberg

(Bloomberg) -- Sweden’s government will provide liquidity guarantees to Nordic and Baltic utilities to protect financial stability amid a surge in energy prices.

A halt in Russian gas export could threaten stability, Prime Minister Magdalena Andersson, who is facing an election next Sunday, told journalists in Stockholm. The guarantees -- designed to help companies struggling to meet the surging collateral requirements needed to trade electricity -- will amount to “hundreds of billions” of Swedish kronor, she said, without specifying.

“We expect this to be in place before stock markets close on Monday, and during the first two weeks, the guarantees will include all Nordic and Baltic actors,” Andersson said. “This provides breathing space for neighboring countries to get their own measures in place.”

Andersson spoke at a joint news conference with Riksbank Governor Stefan Ingves, Finance Minister Mikael Damberg and financial watchdog head Erik Thedeen after Russia’s Gazprom PJSC reversed its plan to resume flows through its key gas pipeline indefinitely, a move decried by European politicians as an attempt to use energy as a weapon.

Skyrocketing prices in Europe make it more expensive for utilities to buy and sell electricity because of the additional collateral required to guarantee trades on power markets facing unprecedented turbulence. Fortum Oyj of neighboring Finland said earlier this week its collateral needed to trade on Nordic power markets rose by 1 billion euros ($1 billion) in a week to 5 billion euros, excluding the collateral posted by its German subsidiary Uniper SE.

The European Energy Exchange AG this week asked for more government support to traders to guarantee their buying and selling as billions of euros put up as collateral for trades are sapping liquidity and making prices even more volatile.

The Swedish parliament will be called in on Monday to process the proposals, the legislature said in a separate statement.

Andersson’s Social Democratic minority cabinet and its constellation with supporting parties may be unseated by the right-wing opposition as the rival blocs are neck-and-neck ahead of the Sept. 11 vote.

Energy policy has become a flash point in Sweden’s political debate, with the opposition announcing their own policies in last weeks aimed at alleviating the pain of households and blaming the government for a power shortage in the south after some nuclear reactors were shuttered a few years ago.

(Updates with details from second paragraph.)