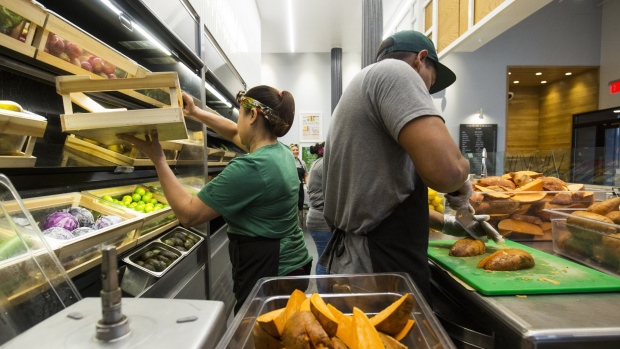 Workers prepare food inside a Sweetgreen Inc. restaurant in Boston, Massachusetts, U.S., on Tuesday, Oct. 24, 2017. The fast casual dining chain Sweetgreen was founded in 2007 by three classmates from Georgetown University, and has expanded from its Washington roots to more than 80 locations nationally. Photographer: Adam Glanzman/Bloomberg , Bloomberg

The Los Angeles-based company in its filing Monday with the U.S. Securities and Exchange Commission listed the size of the offering as $100 million, a placeholder that will change when terms of the share sale are set.

Founded in 2007, the restaurant chain was valued at $1.78 billion in a January funding round led by Durable Capital Partners. Its biggest investors include affiliates of Fidelity Investments, T. Rowe Price, Revolution Growth, D1 Capital, Anchorage Capital Group and Lone Pine Capital, according to its filing.

Sweetgreen, started by Georgetown graduates Jonathan Neman, Nathaniel Ru and Nicolas Jammet, operates 140 restaurants in 13 states, according to its filing.

“When we were in school, there were two choices: food that was slow, expensive and fresh -- or fast, cheap and unhealthy,” the three said in a letter to investors included in the company’s prospectus.

“Over the years, fast food has become synonymous with bad food,” they said. “We believe this presents a massive opportunity to build a transformative business.”

The offering is being led by Goldman Sachs Group Inc. and JPMorgan Chase & Co. Sweetgreen plans for its shares to trade on the the New York Stock Exchange under the symbol SG.