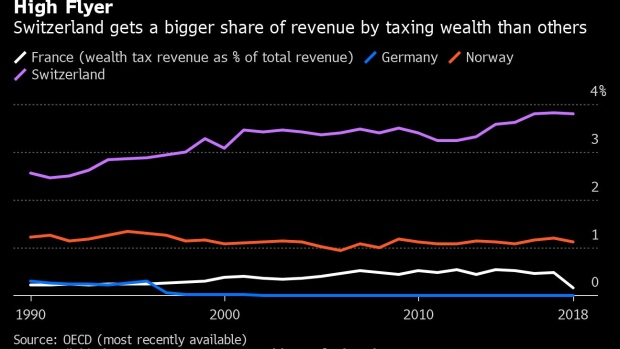 Stefan Kaufmann at his farm in Wetzikon. , Bloomberg

(Bloomberg) -- Switzerland’s wealth tax offers a rare real-world example of how a levy on assets can work, just as such ideas gain traction elsewhere in the wake of the coronavirus crisis.

The measure forces residents in one of the world’s richest nations to tally the value of their investments, real estate, cars, fine art, Bitcoin, and even beehives and cows. A percentage is then skimmed off by cantonal governments. Switzerland, among only a handful of countries with the levy, can make a claim that it has the most effective one.

With the Covid-19 fallout causing government debt to swell, and hurting poorer people most, wealth taxes are being debated from California to the U.K. as a tool both to pay down debt and address inequality. U.S. Senator Elizabeth Warren, Nobel laureate Joseph Stiglitz and economist Thomas Piketty are among proponents.

Criticisms range from the view that it’s wrong to target assets accumulated through income that is already taxed, to more practical questions of how to fairly operate such a levy. The Swiss don’t seem to be very bothered by all of that.

“It works for us,” said Stefan Kaufmann, a farmer from Wetzikon in the canton of Zurich, who describes the policy as a good Swiss compromise. “The wealth tax isn’t a lot. It doesn’t hurt.”

On the final day of each year, Kaufmann -- who sits on the town’s local legislature for the nationalist Swiss People’s Party -- counts up his livestock and enters the totals on a tax return with the rest of his assets. His 50 bulls are worth about 2,000 francs ($2,239) each, according to the rules. His two donkeys are 500 francs a pop.

Kaufmann’s untroubled attitude is common. Switzerland’s cantonal wealth tax just isn’t as emotive a matter as elsewhere. In January, a bid to cut the levy in Zug, the jurisdiction near Zurich known as a low-tax home for hedge funds and commodity giant Glencore Plc, was defeated by lawmakers.

Switzerland is among very few countries left with a recurring annual wealth tax. The number of OECD countries imposing it dropped to four in 2017 from 12 in 1990.

The most common riposte to the policy, also in Switzerland, is that it hits citizens again after they’ve already paid dues on their incomes.

Christian Frey, deputy head of finances and taxes at pro-business group economiesuisse, says it particularly hurts some company owners, who face having to withdraw money from firms to pay the levy, suffering dividend tax in the process.

Another criticism is that rich people can avoid it by shifting jurisdiction, just as Elon Musk announced his departure from California, the U.S. state with the highest income tax.

Switzerland’s rationale is the constitutional principle of everyone paying according to their means. Inheritance tax is low, and there’s no capital gains levy on movable property such as equities.

The measure also comes with safeguards. There’s a formula to ensure people who are asset-rich but with low incomes can still afford it. In Kaufmann’s case, the farmers’ association sets the valuation of livestock annually to help keep filing simple.

The result is that Switzerland derives a bigger share of total tax revenue from the levy than any other industrialized country, according to OECD data.

That’s not to say its effectiveness is unimpeachable. A study by University of Lausanne economics Professor Marius Bruelhart found that a cut in the wealth tax rate in Lucerne was followed by a rise in declared assets, hinting at prior evasion.

Whatever the case, Switzerland appears comfortable with the policy.

“It takes some of the tension out of that political debate around tax between the haves and the have-nots,” said David Wigersma, a Lausanne-based partner at Deloitte SA.