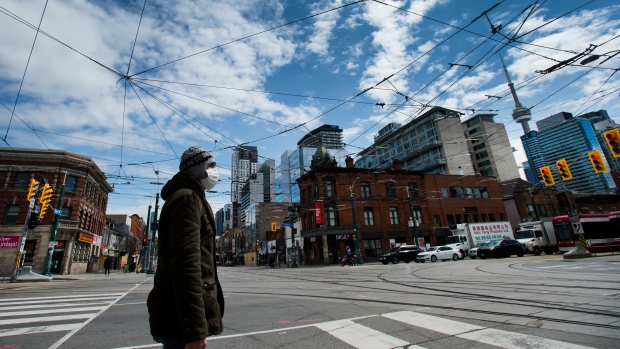 A lone man wears a mask while waiting at the intersection of Queen Street and Spain Avenue in downtown Toronto on Thursday, April 16, 2020. , The Canadian Press

MONTREAL -- For Louise Delisle, an African Nova Scotian who grew up in the rural town of Shelburne, the racism her community has experienced over the years is reflected in the health of its members.

Her father and brother died of cancer. Her mother is still alive after two bouts of breast cancer, and her sister and niece are also cancer survivors. The 69-year-old Delisle lays the blame for her community's health problems on a now-closed toxic dump that existed for decades near the historical Black part of town.

"There is a lot of cancer in just about every family," she said in a recent interview.

Ingrid Waldron, a professor in Dalhousie University's school of nursing, says the health conditions in Shelburne and another rural African Nova Scotia community, Lincolnville, are examples of systemic racism in Canada.

Systemic racism, Waldron said, refers to the exclusion or under-representation of people of colour and Indigenous people in society through the policies and decisions of those in power. These policies and decisions lead to inequalities and disparities  on such measures as income, education and, in the case of Shelburne, health.

The term has re-entered mainstream public debate across Canada following the killing of George Floyd, who died in Minneapolis police custody at the end of May. Floyd's killing triggered protests against anti-Black racism across the United States and in other parts of the world, including Canada.

On Thursday, Prime Minister Justin Trudeau said Indigenous and racialized Canadians have long known "that there is systemic discrimination right across our country and every part of our country and in our institutions. And recognizing that is difficult."

Waldron said in a recent interview that systemic racism is the way "disadvantage, discrimination and exclusion" are embedded in social systems.

In 2016, Indigenous women accounted for roughly 31 per cent of the federal prison population, while men represented 23 per cent.

Her 2018 book, "There's Something In The Water," examined the legacies of industrial pollution on towns such as Shelburne and Lincolnville. She argues that landfills, trash incinerators, coal plants, toxic waste facilities and other environmentally hazardous activities tend to be near communities of colour, Indigenous territories and the working poor.

"People didn't want to do anything that was going to make them stand out or seem like a troublemaker in the community," she said.

Inequalities in Canada are reflected in many indicators beyond health.

On Tuesday, Quebec's human rights commission published a report examining the demographics of public-sector workers in such areas as schools, police forces, public transit and municipalities.

When it comes to policing, reports in cities such as Montreal and Halifax have indicated that people of colour are more likely to be subjected to so-called street checks.

In Montreal, a 2019 report commissioned by the city's police force indicated Black people were 4.2 times more likely to be stopped by police than whites were, and that rate increased to 4.6 times for Indigenous people.

During the past two weekends, thousands of people gathered in protests across Canada to denounce anti-Black racism in the country's police forces.

That same level of support, however, was not seen a few months earlier, before the COVID-19 pandemic, when First Nations people across the country protested in solidarity with hereditary chiefs from the Wet'suwet'en First Nation in British Columbia contesting a natural gas pipeline.

Winnipeg-based Cree community organizer Michael Redhead Champagne said he is hopeful the recent mobilization is a sign of changing attitudes.

He noted that thousands gathered at the Manitoba legislature to denounce anti-Black racism last Friday. Those people, he said in a recent interview, signalled they wanted to "understand systemic racism" and shed harmful habits.

"It breaks my heart that I don't see 20,000 people showing up to support (Indigenous issues) and to support my relatives in that way, but it gives me hope that people are willing to learn now."