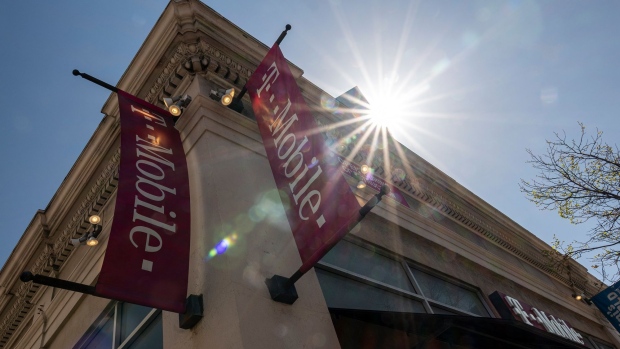 Signage for a T-Mobile store in San Francisco. , Bloomberg

(Bloomberg) -- T-Mobile US Inc. is trying to pull away from the pack in the 5G race with the introduction of a wireless home broadband service and a free-phone giveaway.

Starting Wednesday, people in select areas can sign up for a $60-a-month internet service with average speeds of 100 megabits per second. The service requires a combination receiver/Wi-Fi gateway device near a window.

The service comes two years after Verizon Communications Inc. launched its 5G home internet, but the technology has been slow to take off so far. T-Mobile plans to offer the service in areas where it has ample wireless network capacity, taking aim directly at the cable companies that dominate the home broadband market.

T-Mobile is also starting a phone trade-in promotion, allowing anyone with a working phone to swap for a $300 Samsung 5G phone or get half-off an Apple iPhone 12 5G.

“They want to ramp up 5G quickly, not just for bragging rights, which is important, but it also gives them a lower cost to provide the service,” said Roger Entner, an analyst at Recon Analytics.

T-Mobile, by way of the Sprint takeover a year ago, acquired enough airwaves to have a one-year lead on Verizon and AT&T Inc. in the buildout of midband 5G networks. T-Mobile expects to have as many as 8 million home broadband customers in five years.

“Our wireless competitors are not in a great position from a 5G coverage and capacity standpoint to be able to roll out home internet broadly,” said Dow Draper, T-Mobile’s executive vice president of emerging products.

“We think that there’s more than enough opportunity for our product, which can handle significant usage.”

Given the poor track record of wireless home broadband and the imperfect signal reception compared with landline connections like fiber, not everyone is optimistic.

T-Mobile will only get to about 4 million subscribers, or half of its target, by 2025 because it will have limited excess network capacity and consumers may continue to prefer landline internet providers, New Street Research analyst Jonathan Chaplin wrote in a note Wednesday.

“We are not sure what the demand will be for the product,” Chaplin wrote. “It will be slower and less reliable than cable.”