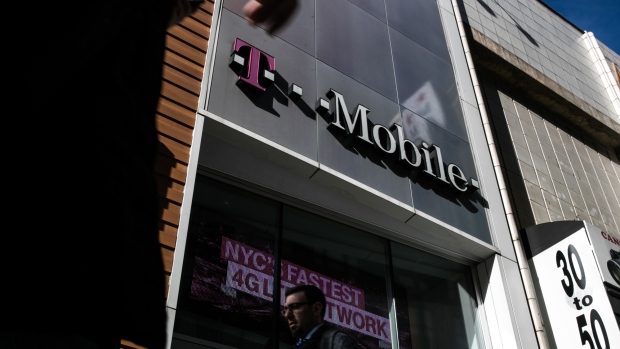 Pedestrians pass in front of a T-Mobile US Inc. store in New York, U.S. on Monday, April 30, 2018. Sprint Corp. suffered its worst stock decline in almost six months, rocked by fears that a proposed $26.5 billion takeover by T-Mobile US Inc. will get rejected by antitrust enforcers. , Bloomberg

T-Mobile US Inc. (TMUS.O) and Sprint Corp. (S.N), fighting to win regulatory clearance for their US$26.5 billion merger, are considering possible concessions to salvage the deal, according to people familiar with the situation.

Among the top options being discussed is the separation and potential sale of their so-called prepaid businesses, said the people, who asked not to be identified because the deliberations are private. Other options -- such as selling airwave licenses or setting up a new fourth carrier through a network-leasing arrangement -- are far less attractive, they said.

The two carriers, which announced plans to merge more than a year ago, face concerns that the deal will hurt U.S. wireless competition. Until now, T-Mobile and Sprint have taken a bigger-is-better approach, arguing that together they could better challenge larger rivals Verizon Communications Inc. and AT&T Inc.

The idea of concessions suggests that they’re anticipating a challenge from the Justice Department’s antitrust division and the Federal Communications Commission, which both have to sign off on the transaction. It’s common for companies seeking merger approval to offer asset sales to resolve concerns.

Shares of T-Mobile and Sprint pared losses on Monday after Bloomberg reported on the possibility of concessions. After declining as much as 4.7 per cent earlier, Sprint was down 1.8 per cent to US$6.08 as of 3:50 p.m. in New York. T-Mobile dropped 2.6 per cent to US$73.30.

Last month, T-Mobile Chief Executive Officer John Legere disputed a report that regulators told the companies that the deal -- as structured -- would be opposed. Since then, Legere and Sprint Chairman Marcelo Claure have visited officials in Washington pitching the deal. They argue the new company could provide competition to cable companies with in-home broadband, as well as beat Verizon and AT&T in developing a nationwide 5G network.

Those promises alone may not have been enough. A concession offer, which would hinge on the deal getting cleared, may help advance the discussions. Already, the companies have said they will create a customer-service center employing more than 1,000 people near Rochester, New York -- but only if the merger goes through.

The prepaid industry -- where wireless customers don’t have subscriptions -- has been a focus of some of the state attorneys general. They fear that a consolidated, three-carrier market would harm low-income customers the most by reducing choices and raising prices.

Together, T-Mobile’s Metro brand and Sprint’s Boost and Virgin Mobile brands make up the largest segment of the U.S. pay-as-you-go market, with about 42 per cent. TracFone Wireless Inc. would be second, with about 32 per cent, followed by AT&T’s Cricket brand, at roughly 25 per cent. These services are popular among people with little or no access to credit.

A spinoff of the prepaid business might give regulators and antitrust enforcers the type of structural remedy that can be held up as an example of ensuring competition in the market.

The idea has been floating around ever since the deal was announced a year ago. A Boost Mobile founder, Peter Adderton, whose business was acquired by Sprint when it merged with Nextel Communications in 2006, has pushed to have the companies sell one of the brands to preserve competition.