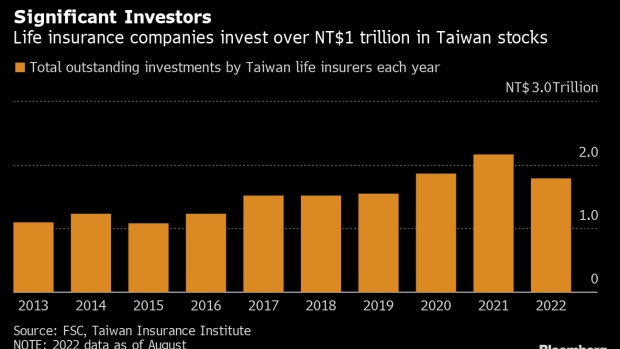 A pedestrian passes the Taipei 101 building and buildings under construction in Taipei, Taiwan, on Tuesday, May 24, 2022. US President Joe Biden is seeking to show US resolve against China, yet an ill-timed gaffe on Taiwan risks undermining his bid to curb Beijing’s growing influence over the region. Photographer: Lam Yik Fei/Bloomberg , Bloomberg

At least two major Taiwan insurers will ask the Life Insurance Association to seek the exclusion on behalf of its members, or to be allowed a longer reporting period once the law is passed, the people said, declining to be named as they are not authorized to speak publicly.

Proposed amendments that are expected to be passed in the current legislative session will require that investors disclose if they accumulate more than 5% of a company, compared with a 10% threshold at present. The disclosure would have to be made within ten days, with any subsequent increase or decrease of one percentage point having to be announced within two days -- as is the current practice.

The life insurers are concerned that the amended rule will lead to frequent disclosures which could encourage retail investors to capitalize on the changes, the people said. The labor retirement fund, which is government-backed, is also expected to apply for more relaxed reporting requirements.

Under current regulations, pension funds and insurers are not allowed to own more than 10% of a listed company. As a result, they are effectively exempt for disclosure requirements because their stakes will never breach the current 10% limit.

But once the new law is implemented, it’s likely that they will have to report when stakes exceed 5%, and continue to make disclosures if the holdings rise or fall by one percentage point.

“It is normal to receive opinions on the amendment of regulations, and the opinions of all parties will be taken into consideration in the process of amending the law,” Hwang Howming, chief secretary of the Securities and Futures Bureau of the Financial Supervisory Commission, said in a response to Bloomberg.

The Life Insurance Association could not immediately comment on the matter, and the Labor Fund Utilization Bureau, which oversees the pension fund, declined to comment.

The FSC said the reduction of the disclosure threshold to 5% is intended to improve information transparency and to be aligned to trends in foreign legislation.

According to the Insurance Bureau of the Financial Supervisory Commission, Taiwan’s life insurance industry had invested about NT$1.8 trillion ($57 billion) in Taiwan stocks at the end of August. The labor retirement fund has meanwhile poured in at least NT$340 billion into the Taiwan stock market, which is valued at about NT$42 trillion.