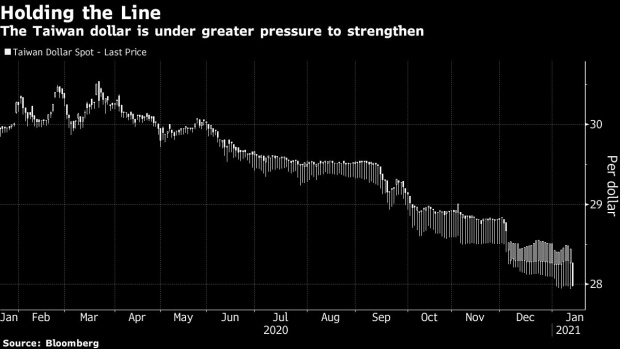 (Bloomberg) -- Taiwan’s authorities are having to work harder to stop the local dollar from strengthening.

While the currency closes each day little changed amid intervention by the central bank, intraday gains are widening. The currency advanced as much as 1.9% on Wednesday, its biggest increase since 2011. Foreign investors are pouring cash into Taipei’s financial markets, which has helped drive the local dollar to its highest level in 23 years.

Along with intervention in the foreign-exchange market -- called “smoothing” in official language-- the central bank is taking more unconventional methods to rein in currency strength. The monetary authority last week posted a cartoon on its Facebook page, urging cash-flush manufacturers to hold on to their greenbacks. It also asked the public to help maintain the stability of the currency market.

The Taiwan dollar is Asia’s best performer in the past 12 months, climbing 6.9% against the greenback. Taiwanese assets are attractive to global investors because of its booming technology sector, with export orders growing at the fastest pace since 2010. Inflows are only increasing: The island has attracted $3.1 billion of net funds this month, the most out of eight Asian markets tracked by Bloomberg.