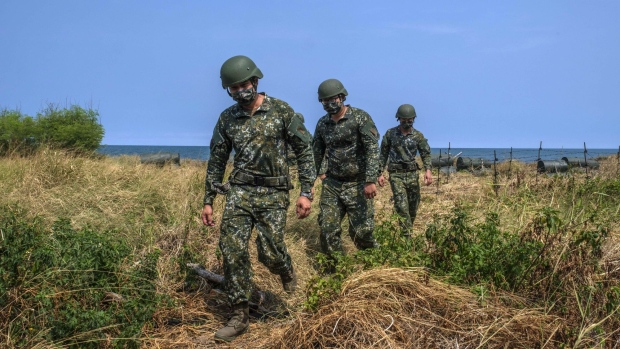 Soldiers walk along a beach during a military exercise in Miaoli, Taiwan, on Tuesday, July 26, 2022. The dispute over Taiwan's sovereignty is the main issue that risks one day leading to war between the US and China, with calls growing among American politicians for a commitment to get involved if Beijing invades the island. , Bloomberg

(Bloomberg) -- Taiwan will make an announcement on extending its four-month military conscription requirement by the end of this year, Defense Minister Chiu Kuo-cheng said, in the latest sign Taipei is taking a potential war threat from China more seriously.

Any change to military service would come with a one-year notice period, Chiu told lawmakers in Taipei on Wednesday, noting that the ministry was still seeking opinions from various departments.

“Insufficient manpower in the military is one of the reasons for extending military service,” Chiu said Wednesday. “Four months of service is not enough as threats from the enemy are now severe.”

Chiu said the government was still weighing exactly how long to make military service, declining to answer lawmakers’ questions on whether a one- or two-year requirement was most likely. Currently, all Taiwanese men over 18 must serve four months in the military.

The timeframe Chiu outlined could delay a decision on conscription until after November’s local elections, seen as a mid-term test for President Tsai Ing-wen ahead of a presidential vote in 2024. Extending military service is an unpopular idea among many young Taiwanese, most of whom support Tsai’s Democratic Progressive Party.

Taiwan is trying to bolster its combat readiness in the wake of increased military pressure from Beijing after US House Speaker Nancy Pelosi’s August visit to the island the Communist Party considers its territory. China responded with unprecedented military drills that eroded a decades-old buffer zone around Taiwan.

Tsai told the Global Taiwan Institute Annual Symposium on Wednesday that China’s “persistent” military activity in recent months had threatened peace in the Taiwan Strait. “We are working to adapt our defense strategy to the changing threats,” she said.

Taiwan will now treat any People’s Liberation Army incursion into the island’s airspace as a “first strike,” Chiu told lawmakers Wednesday, after a recent spate of closer flights by Chinese warplanes and drones. So far, Chinese military aircraft and warships have kept well outside the smaller 12-nautical-mile (22 kilometer) area that Taiwan regards as defining its territorial sea and airspace.

Taiwan is set to be a core issue at the twice-a-decade congress of China’s ruling Communist Party, scheduled to begin Oct 16. Chinese President Xi Jinping is widely expected to secure a third term in power, and could face greater pressure to bring Taiwan under Beijing’s rule, as part of a longer-term goal of national rejuvenation.