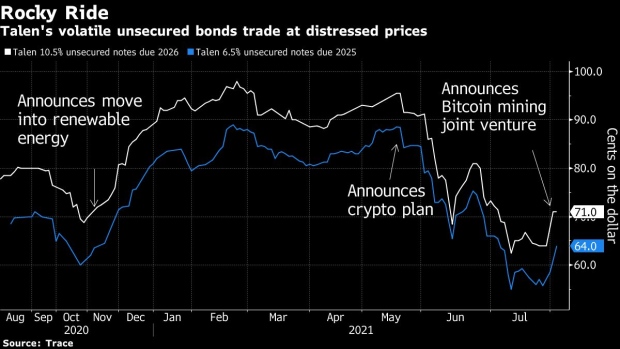 Next week’s earnings call can’t come soon enough for Talen Energy Corp. creditors, who got an unwelcome surprise in May -- a planned pivot to crypto mining for the deeply indebted power producer -- followed by months of scant details from top executives before their first update this week.

Management gets another shot during the Aug. 12 event at persuading investors to support its buzzy new strategy, which hinges on using renewable energy to mine Bitcoin. For debt holders, who eagerly bought Talen’s bonds in November after it outlined an ambitious plan to stop burning coal, it offers some long-awaited clarity on whether to fund the coin-mining plan sprung on them six months later, an idea that CreditSights analyst Andy DeVries says “feels like a Hail Mary.”

The shift is a bid to halt years of declining fortunes for Talen, which owns a mix of fossil-fuel plants, as well as nuclear and some in-development solar assets. The power generator, taken private by Riverstone Holdings LLC in 2016, has struggled to support its $4 billion debt load amid weak energy prices, dividend payments to its sponsor and growing pressure to become more environmentally friendly. One of its units filed for bankruptcy in 2018.

Bondholders were largely able to get behind the first part of its transformation plan -- the move away from fossil fuels -- which Chief Executive Officer Ralph Alexander announced in late 2020 with support from the Sierra Club as part of a new “no harm” corporate creed that would be good for the environment, the community and its bottom line. Investors, who cheered the troubled power producer’s new greener strategy, were eager to hear about the plan’s progress when they logged onto Talen’s ESG day in May.

“Many people were hoping that the ESG day would have an update on the solar strategy,” said DeVries. They disclosed the Bitcoin plan instead, which would require it to raise as much as $800 million in new equity to fund the construction of two data centers to be built next to its Susquehanna nuclear power plant in the middle of shale country, Pennsylvania.

“No one in the bondholder community wants to hear that, especially legacy utility holders that are still in these bonds,” he said.

Talen’s 6.5% unsecured notes due 2025 had traded at a more than one-year high of 89 cents on the dollar in February. After the crypto plan was released, its debt started to fall, touching a low of 55 cents in July. They’re currently trading around 64 cents on the dollar, reflecting serious doubt that investors will be repaid.

The pivot “drew a lot of skepticism from investors,” Bank of America credit analysts led by Antoine Aurimond said in a June note. “The market was likely disconcerted by the venture into the more esoteric data center and coin mining businesses” and the lack of clarity around how it would cut debt.

To be sure, Talen wouldn’t be the first power company to move into minting crytpocurrency, given how energy intensive the process is. Greenidge Generation Holdings Inc. converted a dormant coal plant in New York to natural gas and is using it to mine Bitcoin, while Marathon Digital Holdings Inc. said in October it would be partnering with a Montana power plant to mine crypto. Meanwhile, China’s ban on Bitcoin mining has driven a wave of its miners to other countries including the U.S. and further ratcheted up competition for cheap and reliable electricity.

But Talen borrowed more heavily than many of its rivals, with debt about 7 times higher than its earnings; peers typically carry debt of just 3 to 5 times earnings. It will also get a lower price for its electricity starting next year, which will add further pressure to earnings.

The debt load makes it difficult for Talen to compete against much larger players in the emerging renewable space, said Moody’s Investors Service analyst Edna Marinelarena, who rates the company’s debt-issuing entity deep in junk territory at B2 and warned in June that a downgrade may be coming. The company acknowledged in its crypto pitch that it will likely need to recapitalize in order to execute on its renewable plans, according to analysts who watched the presentation.

The crypto plan is “definitely high risk,” Marinelarena said. “If they are able to pull it off, it does have some upside.”

The plan appears to be moving forward. On Tuesday, Talen announced a coin mining joint venture with TeraWulf Inc. to develop as much as 300 megawatts of Bitcoin mining capacity. Talen said it will fund its share in the JV from its current liquidity and from third-party debt and equity sources. Some of Talen’s bonds inched up following the TeraWulf partnership announcement.

The Woodlands, Texas-based company’s focus on raising money for the new data and Bitcoin venture means it’s not as focused on raising cash to pay down existing debt, analysts said. To fund the projects, Talen may try to do some kind of debt exchange, promising bondholders more security or tighter protections in exchange for swapping their existing notes into new debt at a discount, DeVries said. Either way, he said, Talen’s private-equity owner will come out on top.

“Riverstone is very sharp,” DeVries said. “They’ve already gotten their entire investment back. Everything they’re doing now is playing with house money. Along those lines, they can afford to go for some Hail Marys.”