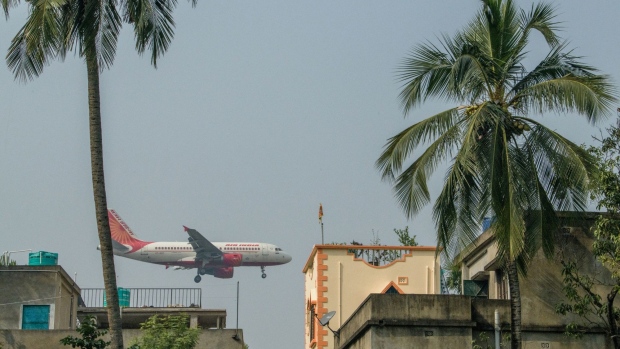 An Air India Ltd. aircraft prepares to land at Netaji Subhas Chandra Bose International Airport in Kolkata, India, on Sunday, Dec. 6, 2020. Covid-19 has put the sprawling Tata Sons Ltd., which owns a 51% stake in each of AirAsia India and Vistara, at a crossroads. Either go big, by buying state-run Air India for example, or bow out before spilling more red ink. Photographer: Arko Datto/Bloomberg , Bloomberg

(Bloomberg) -- India’s largest conglomerate the Tata Group has submitted a financial bid for state-run Air India Ltd. as the government tries to sell the money-losing carrier after two failed attempts.

The bid was entered Wednesday by Tata Sons Ltd., the group holding company, which controls Jaguar Land Rover and owns a majority stake in AirAsia India, according to a Tata spokesperson.

The bid has boosted prospects for the sale after the government sweetened the deal by allowing suitors to decide how much of the carrier’s debt they want to take on. The rules before that deterred bidders by requiring them to assume $3.3 billion of debt.

SpiceJet Ltd. owner Ajay Singh has also bid for Air India in his personal capacity, according to people familiar with the matter. Singh didn’t respond to multiple messages. A group of Air India employees, who had partnered with a Seychelles-based fund, was disqualified from the bidding process in March.

Proceeds from Air India’s sale will be a critical source of revenue to plug the government’s widening budget deficit and as it looks to spur the pandemic-hit economy.

Two previous attempts to offload the airline failed. In 2001, Singapore Airlines Ltd. dropped its bid for a stake in Air India, citing political opposition as one of the reasons. In 2018, IndiGo, India’s biggest airline, pulled out of the running, saying it didn’t have the means to buy the carrier in its entirety and make it profitable.

Despite the mounting debt and losses, Air India has some lucrative assets, including valued slots at London’s Heathrow airport, a fleet of more than 100 planes and thousands of trained pilots and crew.