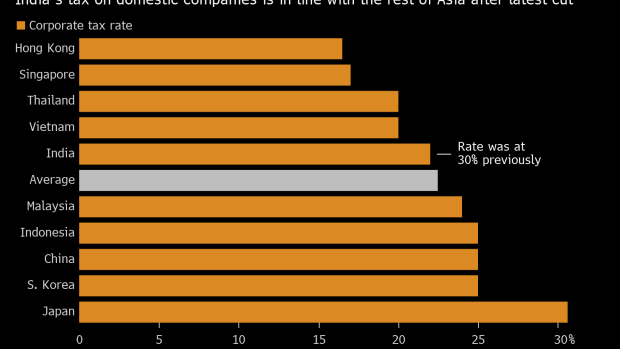 (Bloomberg) -- Prime Minister Narendra Modi arrives in the U.S. a day after delivering a $20 billion tax-cut stimulus for companies, which strengthens his pitch to American chief executives about the ease of doing business in India.

His government on Friday cut corporate taxes to rival some of the lowest in Asia, helping India compete with the likes of Vietnam and Indonesia to attract investments. When Modi meets energy company CEOs in Houston Saturday, he’s expected to tout the trimmed rates.

New companies setting up operations from Oct. 1 will pay an effective rate of 17.01% as tax, about the same as in Singapore.

“Having fresh economic reforms to attract business gives him a stronger story,” said Richard Rossow, senior adviser at the Washington-based Center for Strategic International Studies. “These tax cuts will help India rebuild its image as an investment destination.”

The cropped tax rates are the latest in a series of steps announced by the government, including easier foreign investment rules for companies from Apple Inc. to Huawei Technologies Co. to BHP Group Plc, to revive economic growth from a six-year low. While Indonesia too plans to lower tax on corporates, Vietnam is by far the biggest winner in the region from trade diversions caused by the U.S.-China spat.

“The lower tax on new manufacturing facilities makes India very competitive among emerging markets,” said Dinesh Kanabar, chief executive officer at Mumbai-based Dhruva Advisors LLP. “This would give out a very positive signal to those that are contemplating investing in India.”

India got $3 billion in foreign direct investment from American companies last year, making it the fourth largest investor in the $2.6 trillion economy.

India recently combined 10 state-run banks to form four large lenders and, while the move falls short of the privatization several investors seek, it gives him something more to tout after his attempts to reform land and labor laws in the previous term failed.

Modi is also scheduled to address an Indian diaspora event -- ‘Howdy Modi!’ -- in Texas, where he will be joined by U.S. President Donald Trump.

India and the U.S. are also working toward easing trade tensions, including a possible withdrawal of some disputes from the World Trade Organization, ahead of a meeting between the two leaders.

The U.S. has called on India to remove what Commerce Secretary Wilbur Ross earlier described as “unfavorable treatment” to some American companies such as Walmart and Mastercard.

“But taxes are not often listed as a primary reason firms have not invested more heavily in India,” said Rossow. “Other reforms remain quite important such as easing land acquisition rules, reducing onerous labor regulations, lifting remaining FDI restrictions, and lowering trade barriers.”

--With assistance from Nupur Acharya.

To contact the editors responsible for this story: Nasreen Seria at nseria@bloomberg.net, ;Ruth Pollard at rpollard2@bloomberg.net, Karthikeyan Sundaram, Jeanette Rodrigues