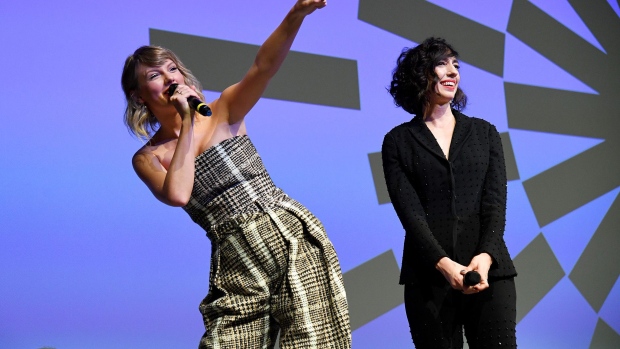 At Sundance, the Utah film festival known for launching the careers of unknown filmmakers like Quentin Tarantino, it’s corporations that are stealing the show this year.

Among the hot tickets were a Netflix Inc. documentary about pop star Taylor Swift and a four-part Hulu series about Hillary Clinton. Many other hotly anticipated pictures were snapped up by streaming services before they were submitted to Sundance or just before the festival started. Walt Disney Co.’s Searchlight Pictures emerged as winner of a reported bidding war for “The Night House,” a horror film.

That streaming services are cornering the indie film and documentary markets is a sign of the times. Viewers are continuing to migrate away from linear TV and theaters, opting instead to enjoy new shows and movies at the time of their choosing and in the privacy of their homes.

The frenzy has given documentaries newfound cachet.

“Documentaries have never really had distribution before -- you’d have to go to a specialty movie theater,” said Bryn Mooser, chief executive officer of the production company XTR and co-producer of “Mucho Mucho Amor,” a film bought by Netflix. “Now when you turn on Netflix or Hulu, a documentary is literally on the tile next to ‘Avengers.’”

The largest independent-film festival in the U.S., the 42-year-old Sundance is both a showcase and market for new movies. Pictures compete in a variety of categories, while studios, independent distributors and, more recently, streaming services, shop for programming to fill their pipelines.

At one packed event, film mogul Jeffrey Katzenberg presented his new streaming service Quibi. The company, which is run by the former Hewlett-Packard Co. CEO Meg Whitman and backed by several media giants, is targeting smartphone users who want to watch shows of less than 10 minutes.

Quibi doesn’t plan to own its content, meaning suppliers will be free to remarket their programs. Writer, actress and producer Lena Waithe made a documentary about sneakers for Quibi that plays in roughly six-minute installments. She could combine those later into a feature length film and sell it to another platform.

“I love getting paid for the same thing twice,” she said at the event.

The continuing presence of tech and streaming cash eased worries that the Sundance market would be soft in 2020. Last year, Amazon.com Inc. spent about $40 million on four feature films, including “Late Night” and “Brittany Runs a Marathon.” None of them was a big money maker at the box office, sparking fears big checkbooks would stay away from the festival.

Yet the major buyers, from Apple Inc.to traditional distributors like Warner Bros., arrived and screened films, according to participants. Streaming services are having to generate more of their own content now that studios like Disney, which once feasted on licensing content to Netflix, are pulling back movies and shows to support their own online businesses.

Not everything at Sundance finds a buyer right away. “Bad Hair,” a horror flick about a woman who gets a weave to advance her music career, was among the films generating the most buzz at Sundance, but hadn’t been purchased in the first few days.

Still, the opportunities at the festival for independent movie makers are a big draw. Tank Burt, an actress and director from Brooklyn, came to Sundance to pitch two film scripts -- “Supercell,” about an FBI agent who uncovers a terror cell of white supremacists while investigating the murder of a professor, and “Red Baron,” about a young pitcher whose ragtag team makes it to the Little League World Series.