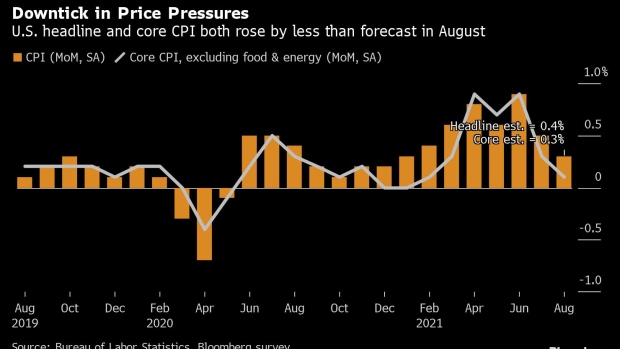 (Bloomberg) -- After months of supercharged U.S. inflation readings, August data offered some comfort for “team transitory” –- those at the Federal Reserve and elsewhere who say price spikes caused by the economy’s reopening will soon abate. Still, the numbers won’t settle the great inflation debate. Plenty of economists point to persistent supply-chain problems and rising wages as reasons why inflation might stay higher-for-longer in the months ahead.

The consumer price index rose by a less-than-forecast 0.3% from July, restrained by declines in used cars, airfares and auto insurance. Those categories have been instrumental in hefty CPI prints over recent months. Annual inflation was 5.3%, down from the pandemic peak two months earlier.

“It’s a win for the transitory camp but I don’t think that debate is settled,” said Aneta Markowska, chief U.S. financial economist at Jefferies. “There’s still a lot of reasons to expect more inflation pressure in the next three to six months.”

U.S. government bonds gained on expectations the August numbers will ease pressure on the Fed to start tightening monetary policy. Yields on 10-year Treasuries dropped about 5 basis points to 1.28%.

Weaker demand stemming from the spread of the delta variant was evident in the August data, including a drop in airfares and hotel prices and a smaller monthly gain for restaurant meals.

‘Picking Up the Baton’

At the same time, price increases in many areas -– like new autos, household furnishings and rents -- are steady or gaining steam. Rental costs posted the biggest advance since March of last year.

“While prices in categories driving the increase earlier in the year have cooled off, others are picking up the baton,” Sarah House and Michael Pugliese, economists at Wells Fargo & Co., said in a note. “Inflation looks set to remain elevated as a result, prolonging the debate over how long ‘transitory’ is.”

Food inflation remains elevated, and even with the smaller monthly gain in restaurant prices, diners are paying 4.7% more than they were a year ago.

That’s likely because leisure and hospitality wages have risen 10.3% over that period, Andrew Hollenhorst and Veronica Clark, economists at Citigroup Inc., said in a note. ‘

“We view this as an early sign that higher wage costs are being steadily passed through as higher consumer prices,” they wrote. “This may drive a broader inflationary trend in services.”

A few categories in the latest CPI report showed limited inflation. Compared with August of last year, wireless telephone services posted the biggest decline since October 2019 and drug costs fell the most in six months.

Overall, “today’s print underscores what I expect will be the main story in the data going forward,” wrote Omair Sharif, president of research company Inflation Insights LLC. “The push and pull between the unwinding of the strength from the supply chain/reopening categories and the firming in ‘stickier’ categories,” like housing costs.