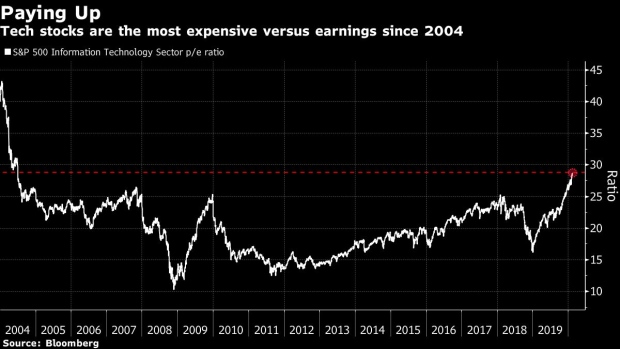 (Bloomberg) -- Tech stock futures fell as traders worked to price in the impact of a revenue shortfall at a company responsible for more than a tenth of the S&P 500’s gain over the last year.

While Apple Inc. described the impact of the coronavirus on its sales as “temporary,” slips among big tech companies sit uneasily with investors who have watched many stocks soar 50% or more over the past 12 months. The iPhone maker has a 12% weighting in the Nasdaq 100 Index, which closed last week at 29.4 times annual earnings, the highest in a decade.

“This will be an important test,” said Jason Browne, president of Alexis Investment Partners. “Obviously, Apple is a huge weight in major indexes, and one of the most loved companies by investors. That may help as it has generally been better to buy Apple on setbacks than to sell, especially if the market expects the disruption to be temporary.”

March contracts on the S&P 500 fell 0.3% as of 10:35 a.m. in Tokyo. Futures on the Nasdaq 100 lost 0.5%. Exchange trading of individual U.S. shares has been closed since Friday for the Presidents’ Day holiday. Both the tech-heavy Nasdaq and Apple itself are already up more than 10% in 2020, after an 86% rally in Apple last year pushed the gauge to its best performance since 2009.

In a Monday release, Apple said it doesn’t expect to meet its revenue guidance for the March quarter due to work slowdowns and lower demand due to the outbreak of novel coronavirus in China. The company had forecast revenue of $63 billion to $67 billion for the fiscal second quarter ending in March. Analysts on average estimated $65.23 billion.

Equity traders face a difficult task in determining how much of the weakness is specific to Apple and whether to project the shortfall on the broader market. The company has always been likely to fare worse given how much of its supply chain and consumer market are in China. At the same time, the sales warning is one of the most tangible examples of impact on a U.S. company and Apple’s size makes it capable of swaying indexes by itself.

“My gut says I think the market probably expects this to some extent, and we know this market tends to look though things pretty well,” said Nathan Thooft, Manulife Asset Management’s head of global asset allocation. “People had anticipation that some of these companies would be affected by what was going on there and they certainly knew there were closures and supply chain issues.”

While no rally is straight up, the one that has swollen Apple’s market value by as much as $545 billion since early August comes close, with only three down weeks in 21. The iPhone maker received 18% of its revenue from China in fiscal year 2019, data compiled by Bloomberg show, enough to keep analysts worried about the longer-term consequences of the outbreak.

Apple’s news will have ramifications for a long list of semiconductors and other suppliers around the world. Its announcement came hours after Dow Jones reported that President Trump’s administration is considering new trade restrictions that would limit the use of U.S. equipment to produce chips for China’s Huawei Technologies Co.

“Of all the big companies exposed to China this announcement seemed the most inevitable,” Michael Antonelli, managing director and market strategist at Robert W. Baird & Co, said by email. “What will this do to the market? It will remind investors that the risks surrounding the coronavirus are still unknown and unquantifiable. There will likely be an increase in volatility this week.”

Apple’s most famous profit warning came in November 2018 amid the U.S. stock market’s worst stretch since the financial crisis. Its shares tumbled 7.1% on Nov. 2, 2018, after reporting stagnant iPhone sales and forecasting revenue for the holiday quarter that fell short of Wall Street expectations at the midpoint. The Nasdaq 100 lost 1.5% that day.

“We’ve been getting nothing but headlines about the virus for weeks. Starbucks is closing its stores, Caterpillar is shutting its facilities. Company after company has been saying this,” Jim Paulsen, chief investment strategist at Leuthold Group, said by phone. “We have been expecting bad sales headlines, this isn’t good, but it’s not surprising.”