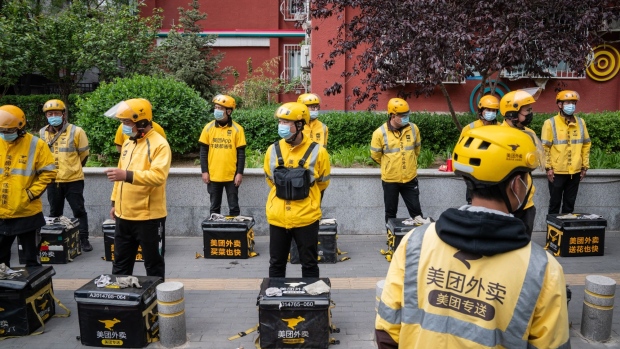 Food delivery couriers for Meituan stand with insulated bags during a morning briefing in Beijing, China, on Wednesday, April 21, 2021. Chinese delivery giant Meituan has raised $9.98 billion from a record top-up placement and a convertible bonds sale as it doubles down on efforts to fight the likes of Alibaba Group Holding Ltd. in newer areas such as online groceries. , Bloomberg

(Bloomberg) -- Tencent Holdings Ltd.’s biggest investees plummeted after Reuters reported the social media giant intends to sell all or much of its $24 billion stake in food delivery giant Meituan to appease Beijing.

The social media giant has engaged financial advisors in recent months on ways to execute the sale of a roughly 17% stake, Reuters reported, citing sources with knowledge of the matter. Meituan slid more than 9% in Hong Kong, while video service Kuaishou Technology fell more than 4% and Bilibili Inc. dipped 2.5%. In New York, e-commerce player Pinduoduo Inc. slipped about 3%.

Beijing since late 2020 has worked to curb the influence of tech industry leaders from Tencent to Alibaba Group Holding Ltd. The two companies exert enormous sway over the Chinese internet economy through part-ownership of hundreds of startups and publicly traded firms. Tencent controlled 606 billion yuan ($89.2 billion) of listed company investments as of March.

The WeChat operator last year began disclosing plans to sell shares in investees such as e-commerce giant JD.com Inc. and Southeast Asia’s Sea Ltd. That in turn spurred speculation it would soon consider paring stakes in other firms such as Meituan and PDD.

“The real fundamental impact of such divestments are usually minimal because business relationships are retained, but there may be short-term pressure not just on Meituan’s share price but also on Tencent’s other investees across the tech industry in China and globally,” said Vey-Sern Ling, a managing director at Union Bancaire Privee.

Tencent is likely to report its first-ever quarterly revenue decline when it reports earnings Wednesday.

China’s social media and gaming behemoth is grappling with a deepening downturn in the world’s No. 2 economy, the product of a worsening property slump and arbitrary coronavirus lockdowns from Shanghai to Shenzhen. Arch-rival Alibaba this month also reported its first quarterly revenue drop on record, but the results were better than feared.

The country’s giant internet industry has made peace with a new era of sedate growth, shifting its focus to profitability over a market-grab after Beijing’s sweeping crackdown wiped more than $1 trillion off their combined market value in 2021.

Beijing remains a headache for Tencent. Although regulators resumed approving new games in April after a months-long hiatus intended to curb addiction, China’s premier developer has yet to win a nod for a single title this year. For now, Tencent is still counting on aging cash cows like Honor of Kings to spur growth for its most lucrative business, while it fights newer mobile hits like Genshin Impact and Diablo Immortal.

The potential selldown of Tencent’s 19% stake in Meituan, as reported by Reuters on Aug. 16, may affect the range and prices of the payment, marketing and cloud services which Tencent provides to Meituan beyond 2023. For the next 16 months until then, Meituan looks likely to remain able to leverage on these services under a 2021-23 contract with Tencent. The selldown shouldn’t come as a surprise given earlier moves by Tencent to monetize its stakes in entities such as JD.com and Sea.

It’s unclear from the Reuters report when Tencent might begin to actually unload stock in its investees. But investors are on edge after a selloff that’s wiped 26% off the Hang Seng Tech Index this year.

Tencent is likely to sell its Meituan stake through block trades, which typically take a day or two to complete, Reuters reported, citing sources. Representatives for the company declined to comment, while Meituan spokespeople didn’t immediately respond to requests for comment.

“If the report is true, the selling pressure on Meituan is enormous, as Tencent may exit all of its holdings via a block trade,” said Willer Chen, an analyst at Forsyth Barr Asia Ltd. “There could be more selling of its investees to ease the regulatory pressure.”

(Updates with PDD’s shares and chart from the second paragraph)