Tesla Inc. (TSLA.O) shares plummeted as a record decline in deliveries during the first quarter stoked concern of slackening demand for the Model 3 sedan that started selling less than two years ago.

In the U.S., where Tesla introduced the Model 3 sedan in 2017, tax incentives for its vehicles shrank. In Europe and China, the company struggled to quickly get the cars to consumers. The 50,900 Model 3 Tesla delivered in the first quarter missed analysts’ average estimate for 51,750 and was less than each of the two previous quarters. The shortfall is a setback for Chief Executive Officer Elon Musk’s plan to accelerate sales by lowering prices and targeting more markets worldwide.

“It’s a disappointment. There’s no way around that,” said Gene Munster, a managing partner of venture capital firm Loup Ventures. “The big question is, what is demand?”

Bloomberg’s experimental Model 3 tracker also missed the dip in Tesla’s production numbers. While the tool has outperformed the average estimate of Wall Street analysts in four out of five quarters, its prediction of 79,130 for the first three months of the year was much too high. One explanation is that the Model 3’s international rollout could have inflated the tracker’s projection.

Tesla reiterated its forecast of 360,000 to 400,000 vehicle deliveries in 2019, which Munster called a “silver lining” that may show buyers are still clamoring for the cars. But Tesla’s history of missing Musk’s ambitious projections may make it difficult to have confidence in the outlook, he said.

Tesla’s 5.3 per cent bonds due 2025 fell almost 2 cents on the dollar to 85.75 cents, taking the yield above 8 per cent, according to Trace. The shares have slumped about 21 per cent this year amid demand concerns, multiple price cuts, job reductions and a continued exodus of senior executives.

Musk capped the quarter with a tweet referring to the work his delivery teams had done as the “most insane logistics challenge” he’d ever seen. Tesla had a total of 10,600 vehicles in transit at the end of last month as the company started sales of the Model 3 in China and Europe. That’s more than triple the number that were still making their way to customers at the end of 2018, though it’s not unprecedented -- more Tesla vehicles were in transit at September’s close. 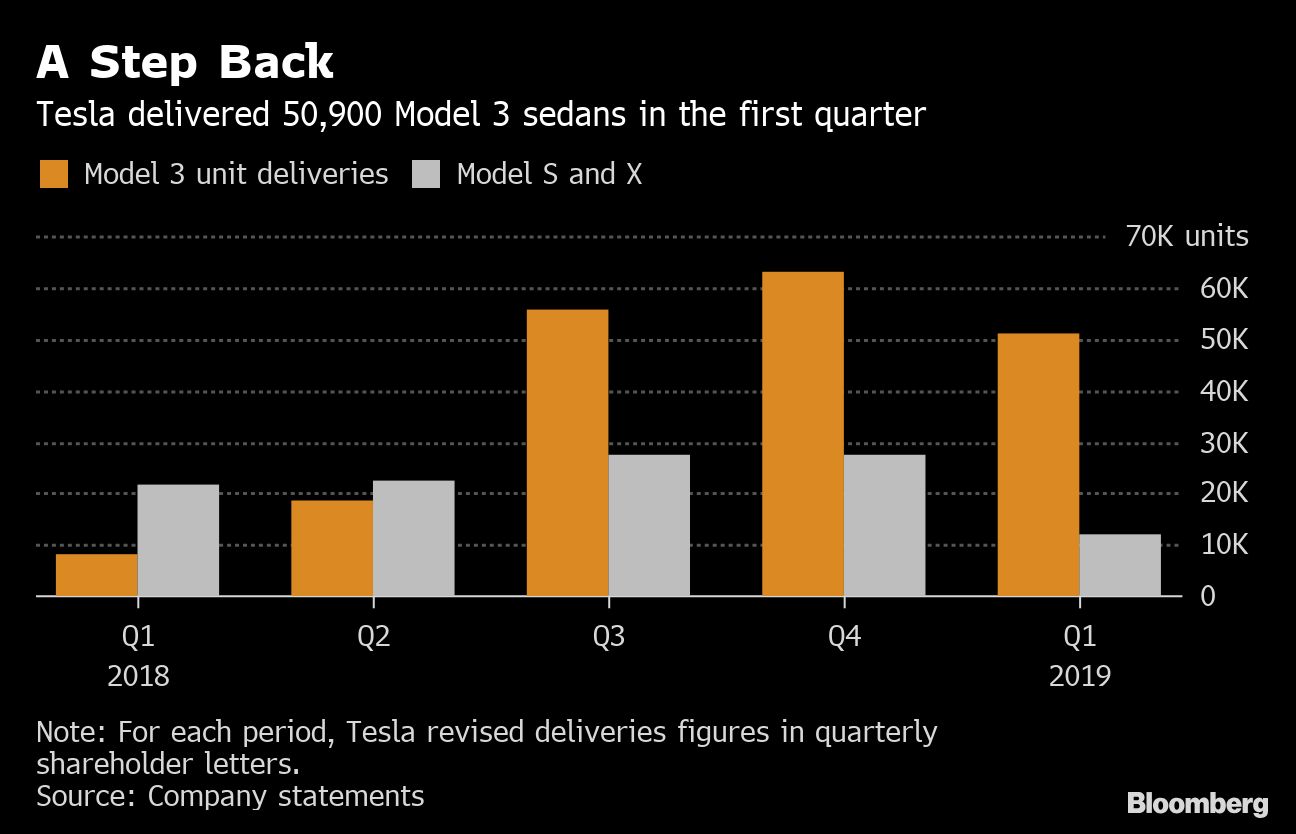 Shipping cars to customers outside the U.S. was critical toward helping make up slack in demand after the federal tax credit Tesla customers were eligible for was cut in half as of Jan. 1. While this pulled some demand forward into the fourth quarter, the company said orders still outpaced the number of vehicles it was able to deliver in the first three months of this year.

Tesla had warned shareholders that first-quarter deliveries of the pricier Model S sedan and Model X sport utility vehicle probably would be lower than a year ago because customers rushed to buy in time for the full US$7,500 incentive. The company set substantially lower daily production targets for the Model S and Model X in January, people familiar with the matter said at the time.

Analyst Joseph Spak of RBC Capital Markets said that Model S and X deliveries, which totaled 12,100, were the lowest since the third quarter of 2015. The drop could potentially translate into Tesla missing revenue estimates by more than $1 billion.

“To us, this signals that the tax subsidy cut in the U.S. was a significant hit to these premium vehicles and/or Model 3 is having a bigger cannibalization impact,” Spak said in a note. 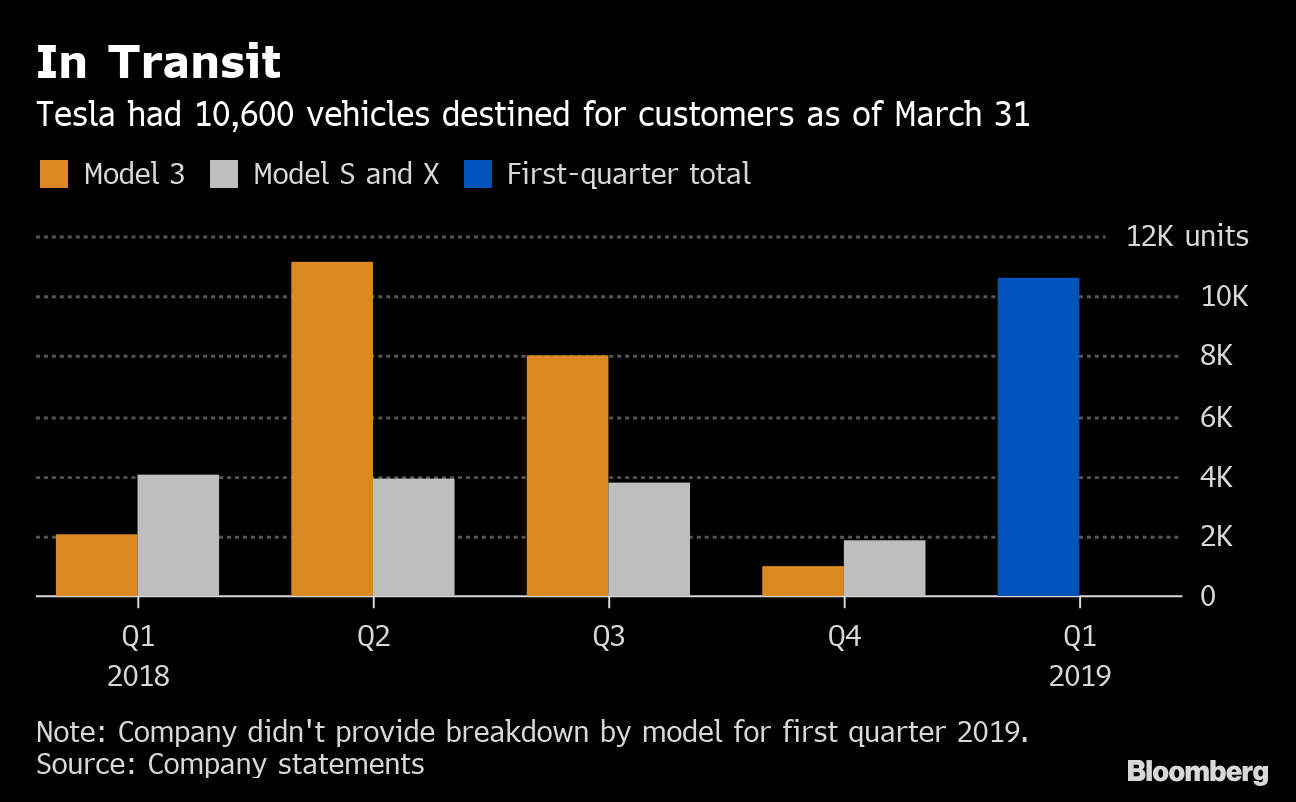 Several Wall Street analysts cut their delivery estimates as the quarter came to an end, citing the tax credit and delays in overseas shipments. Musk also cautioned on Tesla’s Jan. 30 earnings call that seasonality would come into play in the first quarter, with auto sales tending to be lowest in January and February and picking up in March.

Tesla’s debut of a long-promised $35,000 version of the Model 3 during the quarter was overshadowed by announcements of significant cost cuts Musk said were necessary for the company to be able to offer the car at that price point.First, the CEO said in January the company would cut about 7 per cent of headcount -- more than 3,000 jobs. At the end of February, Tesla paired its Feb. 28 announcement of the base Model 3 and price cuts across its lineup with a plan to close all but a small number of stores, shift all ordering online and dismiss an untold number of sales and marketing personnel. The moves blindsided some staff, and the company backtracked just 10 days later.

Tesla ended last year with about $3.7 billion of cash and equivalents, but had to pay off a $920 million convertible bond in February. While Musk warned the company probably would lose money last quarter, and the carmaker has a $566 million note coming due in November, Tesla has said it has enough money to pay off debt obligations with cash flow.

“Because of the lower than expected delivery volumes and several pricing adjustments, we expect Q1 net income to be negatively impacted,” Tesla said in its deliveries statement. “Even so, we ended the quarter with sufficient cash on hand.”