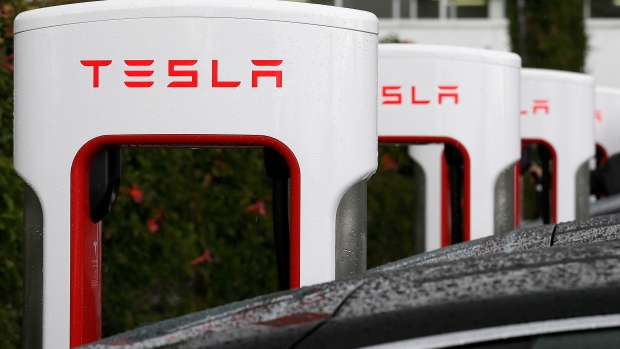 In this May 14, 2015, file photo, Tesla charging stations are shown outside of the Tesla factory in Fremont, Calif. , The Canadian Press

Tesla Inc. (TSLA.O) is taking it on the chin for trailing expectations and facing new investigations.

The shares fell as much as 5.3 per cent Tuesday to the lowest intraday in almost a year, while its non-convertible debt is setting new all-time lows. The stock and bonds are declining as analysts cast doubt on the electric-car maker reaching its production targets for the all-important Model 3 sedan. The U.S. National Transportation Safety Board also announced it’s conducting its second investigation this year into a Tesla car crash.

Model 3 deliveries have fallen short of Chief Executive Officer Elon Musk’s lofty goals since the company started building it in July. Bloomberg’s Model 3 tracker estimates the company may be making about 975 of the cars a week, well short of the target to build at a 2,500-unit rate by the end of this quarter.

An analyst at Citigroup Inc. wrote Tuesday that Tesla may be struggling to convert car shoppers into Model 3 buyers, while a Robert W. Baird & Co. said Monday the company might not achieve its weekly production goal by the end of March. The company is expected to report first-quarter production and deliveries next week.

The NTSB is sending two investigators to examine issues raised by a fatal Tesla crash in California. The safety board will examine the post-crash fire and steps needed to make the vehicle safe to remove from an accident scene, the agency said in a tweet Tuesday. It’s unclear whether the Tesla’s driver-assistance system Autopilot was engaged at the time of the crash.