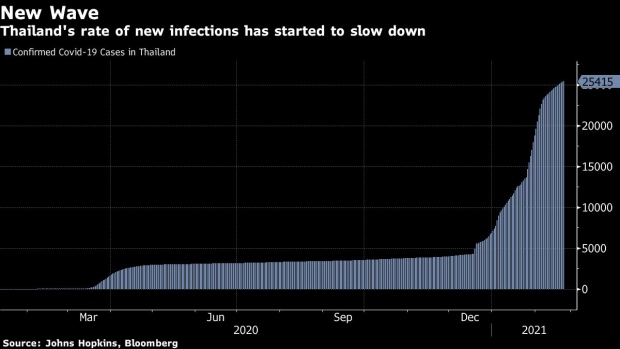 (Bloomberg) -- Thailand extended a state of emergency until the end of March and ordered easing of some Covid-19 containment measures as authorities prepared to start a vaccination drive as early as next week.

The Center for Covid-19 Situation Administration, chaired by Prime Minister Prayuth Chan-Ocha, approved a proposal for the 10th extension of the nationwide state of emergency to contain the outbreak, according to Piyasakol Sakolsatayadorn, a member of the panel. The cabinet is expected to back the extension -- in place since March last year -- at a meeting on Tuesday.

The committee also agreed to allow sale of alcohol at restaurants in cities including capital Bangkok until 11 p.m. that was prohibited following a new wave of infections that began mid-December, Piyasakol said.

Thailand has seen new cases drop below 100 in recent days after imposing curbs on businesses and travel in the worst-affected regions early this year. The Southeast Asian nation is also set to receive the first lot of vaccines from China’s Sinovac Biotech Ltd. this week that will allow the government kickstart an inoculation program among healthcare and front-line workers.

The emergency rules allow the government to enforce mandatory quarantines and streamline disease-control plans without multiple approvals from various agencies. While Thailand has eased curbs on return of foreign tourists, a mandatory two-week quarantine and suspension of scheduled commercial flights have kept most visitors away from the tourism-reliant nation.

Pro-democracy groups have intensified their protests in recent weeks calling for the government’s resignation, with more gatherings planned in the coming days. The government has urged people to avoid large public gatherings to minimize the risks of infections as new cases are still being detected in several regions over the past week, including Bangkok’s neighboring provinces of Pathum Thani and Samut Sakhon.