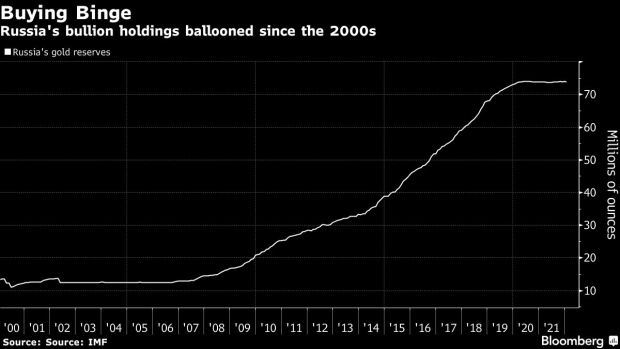 (Bloomberg) -- Russia spent years building a giant stash of gold, an asset that central banks can turn to during a crisis. But any attempt to sell it will now be a challenge just when it’s needed most.

Bank of Russia expanded its gold reserves almost sixfold since the mid-2000s, creating the world’s fifth-biggest stockpile that’s valued at about $140 billion. It’s the type of asset it could sell to shore up the ruble, which has plunged as global economies isolate Russia following its invasion of Ukraine.

Doing so will be difficult. Sanctions forbid U.S., U.K. and European Union institutions from doing business with Russia’s central bank. Traders and banks are wary of buying the country’s bullion indirectly or using other currencies out of fear of reputational damage or falling foul of penalties. And senators in Washington want secondary sanctions on anyone buying or selling Russian gold.

“This is why they bought their gold, it was for a situation just like this,” said Fergal O’Connor, a lecturer at Cork University Business School. “But if no one will trade it with you, it doesn’t matter.”

Moscow may need to look east to central banks in nations like India or China to sell gold or secure loans using it, according to CPM Group Managing Partner Jeff Christian, who has followed precious metals since the 1970s.

“They could pick it up at a discount to the market,” Christian said in an interview from New York. Russia could also sell via the Shanghai Gold Exchange, where it has commercial banks as members, though any sales would likely be small, he said.

Still, a move by a bipartisan group of U.S. senators to further hinder gold transactions may deter banks in places like China and India from buying or lending against Russia’s bullion -- and Beijing wants to avoid being impacted by U.S. sanctions over the war. That’s further reducing Russia’s options.

The Bank of Russia didn’t reply to a request for comment.

In another example of how the West is targeting Russia’s gold trade, the London Bullion Market Association and the CME Group Inc. suspended the country’s refineries from their accredited lists, amounting to a ban on new Russian bars entering the key London and U.S. markets.

The LBMA’s suspension of refineries has restricted countries’ access to the market before. After it suspended Kyrgyzstan’s state refinery last year, the country had to ask Switzerland if one of its refineries could process Kyrgyz gold for its central bank so that it could be accepted on the global market, said people familiar with the matter who asked not to be identified.

At least one Swiss refinery declined to do so on worries of being penalized by the LBMA, one of the people said. The Kyrgyz central bank didn’t specifically comment on the matter.

Other countries have also turned to gold, or tried to, when facing sanctions. Dictator Moammar Qaddafi sold a share of Libya’s reserves to pay troops during an uprising, according to former central bank Governor Farhat Bengdara. And a U.S. indictment against Turkey’s Halkbank in 2019 described how Iranian funds there were converted to gold, exported to Dubai and then sold for cash.

Venezuela has fought to access its gold stored in the Bank of England’s vaults as the U.K. recognized opposition leader Juan Guaido as president. The BOE is a popular place for central banks to keep their bullion due to its location within the London market.

Former President Hugo Chavez had already repatriated much of Venezuela’s gold. Bank of Russia’s gold is stored domestically, according to its 2020 annual report.

If Russia gets desperate, it could sell bullion domestically to buy rubles, Citigroup Inc. said. If done at a fixed price, that would be tantamount to an internal gold standard.

“If things get worse, you could basically re-anchor to a pile of gold,” Credit Suisse Group AG strategist Zoltan Pozsar said on Bloomberg’s Odd Lots podcast. “You need an anchor in situations like this.”