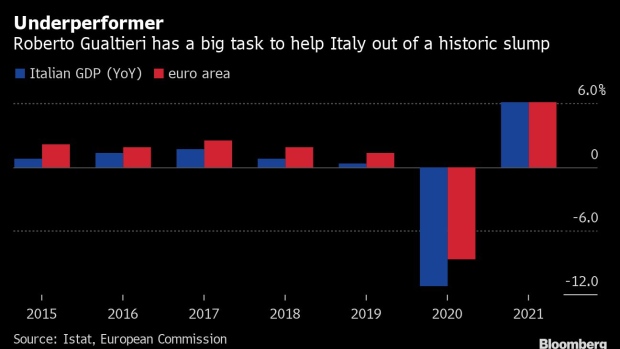 (Bloomberg) -- When Italian officials meet to discuss the public accounts these days their conversations are sometimes punctuated by the click-click-click of the calculator on Roberto Gualtieri’s phone.

The finance minister is not someone who leaves details to his staff. As his team runs through their projections for government revenue and spending, the boss checks the arithmetic himself.

The calculations are bleak.

With public debt set to soar past 150% of GDP, only  European Central Bank bond-buying is keeping the government’s borrowing costs in check and that situation may not last if foreign investors continue ditching Italian debt.

So behind the arguments over the European Union’s recovery plans is an even bigger question: How much is it really going to cost to keep Italy in the euro? And the answer, to a large extent, will depend on the 53-year-old former communist who is fast becoming the country’s most powerful politician.

Read More: The Virus Will Force Europe to Make a Decision About Italy

His influence can be felt everywhere, from navigating the Brussels bureaucracy to the palace intrigue in Rome. In fact, he just emerged from a bruising all-night meeting of the ruling coalition over the tortuous question of whether Italy’s mighty Benetton family should be stripped of its money-making toll-road concessions.

But some of those around him are asking if Gualtieri can keep it up.

The finance chief has leeway to direct 75 billion euros ($85 billion) of stimulus funds, with another 20 billion euros likely to be approved soon. His ministry controls the export credit agency backing 400 billion euros of loans for companies damaged by coronavirus and if EU leaders can agree on the terms for a giant recovery fund at their summit this week, he could also be responsible for tapping another 180 billion euros in grants and emergency loans.

That’s almost 700 billion euros in total, or almost half the country’s GDP by the end of this year. And the minister wants to go over the math line by line.

Read More: Something Has Snapped in Italy’s Stormy Relationship With Europe

“Our economic response has been bold,” Gualtieri told Bloomberg Television’s Francine Lacqua in an interview last week. “The state has to take a stronger role to protect the economy, to bear losses, to inject guarantees and even capital but we will do this only when necessary and as far as necessary.”

One person with knowledge of his working habits said Gualtieri struggles to delegate even minor decisions and winds up working brutally long hours under great stress, while leaving his team feeling under constant pressure. Because he also wants to be on top of the latest breaking news, he doesn’t always manage to cut through the noise, the person said.

As the government battles the crisis, there’ve been accusations that it’s merely propping up the economy through handouts without addressing the lasting damage and the long-term challenges. Gualtieri has also failed to get the industrial heartland around Milan onside and the rift broke into the open at the end of May when his plans were attacked by Carlo Bonomi, the head of Italy’s business lobby.

“These policies risk doing more harm than Covid,” Bonomi said in an interview with La Repubblica.

Since the crisis started, Gualtieri has also lost touch with at least one contact with more experience of crisis-fighting who he used to tap regularly for advice, said another person.

In his late teens Gualtieri joined the communist party’s youth league and then cycled through the various metamorphoses of the Italian left before helping to found the more moderate Democratic Party.

For a time, he concentrated on his academic career becoming associate professor of contemporary history at Rome’s La Sapienza University. He has published several books, particularly on the history of Italy’s communist party and the future of the European Union, two leitmotifs in his life.

In 2001 he became head of the Roman secretariat of the Democrats of the Left placing him squarely, though quietly, into the power games of the Italian capital.

In 2009 he shifted to Brussels, elected three times to the European Parliament where he became a skilled operator within the EU machinery. From the influential Economic and Monetary Affairs Committee he worked to soften the impact of the EU’s financial regulations on Italy’s battered banks and helped an Italian, Andrea Enria, to leapfrog the Irish favorite to become chair of the ECB’s supervisory board.

When the Italian government collapsed in the summer of 2019 after a year of euroskeptic grandstanding, Prime Minister Giuseppe Conte recognized he needed someone to prove that Europe would be able to do business with Italy again in his second term. He turned to Gualtieri.

The new finance chief inherited an economy that has hardly grown since the start of the euro and squandered the windfall that came with monetary union. He was barely into his job before the coronavirus raced through northern Italy, slamming the economy and its people. The Bank of Italy forecasts the contraction this year could be as much as 13.5%.

Yet the crisis also offers Gualtieri and Italy an opportunity to finally turn things around.

The minister has already made progress in rebuilding the relationship with the EU and has a direct line to former Italian Premier Paolo Gentiloni, now EU commissioner for economic affairs.

The fact that the Dutch and the Austrians are even prepared to discuss 750 billion euros of joint bond issuance to help southern Europe weather the impact of the virus is testament to Gualtieri’s lobbying work.

“It’s a win-win-model,” Gualtieri said last week. If EU leaders can reach an agreement when their talks begin Friday, they will be “avoiding a situation where everyone is worse off,” he added.