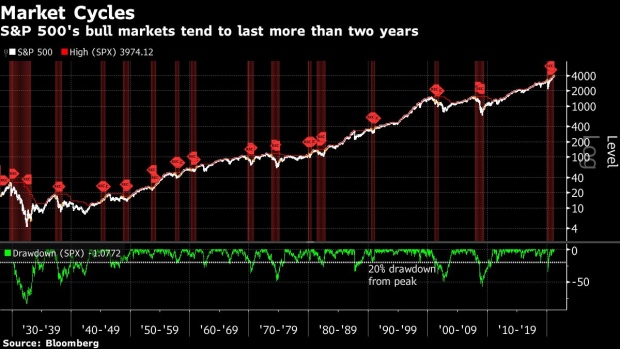 (Bloomberg) -- No matter how dim a view is taken on valuations, or the untethered exuberance of its retail devotees, or even its actual age, the bull market in stocks keeps managing to deliver goods to its faithful.

Big tech falling? Energy and bank shares pick up the pace. Meme stocks out of vogue? Try software makers that have yet to turn any profits. Discovery Inc. ‘A’ shares got you down? That’s OK. Its ‘B’ class just inexplicably rallied the most in 16 years.

For every retrograde price action in 2021 there always seems to be an equal and opposite reaction, keeping the market aloft. This week it was chip stocks such as Applied Materials Inc. and electric-vehicle makers like Tesla Inc., jumping as an overextended reflation trade took a pause. Up a fourth week in five, the S&P 500 Index hit the 4,000 milestone for the first time.

Not that the single-stock blowups have been easy to digest -- look at ViacomCBS Inc. losing half its value a week ago in the Archegos Capital debacle. And trying to time peaks remains brutal. Nevertheless, investors are unbowed. They poured $86 billion of fresh money into equity exchange-traded funds in March, smashing records for a second straight month, data compiled by Bloomberg Intelligence show.

“There is a fear of missing out to a certain extent,” said Wayne Wicker, chief investment officer at Vantagepoint Investment Advisers. “Having that back-and-forth between growth and value is actually a positive where it provides broader opportunities for investors. It keeps people more attracted to focusing on equity markets.”

Technology stocks, laggards in 2021 amid hopes over a return to economic normalcy, sprung up the leaderboard during the holiday-shortened week as France’s renewed pandemic lockdown helped revive the stay-at-home trade. The tech-heavy Nasdaq 100 climbed almost 3% for the best gain in two months, beating the Dow Jones Industrial Average and Russell 2000, which added 0.2% and 1.5%, respectively, over the span.

You can credit massive monetary and fiscal support for the equity buoyancy, though a nagging feeling among doubters is that all the stimulus could lead to a painful retracing.

Just as violently as they fell during the pandemic crash, stocks have rebounded, with the S&P 500 jumping 80% since bottoming a year ago. That return already surpasses the total gain achieved in three of the 13 previous full bull runs. In some circles, the speed of the recovery is a sign that the 12-month advance is merely an extension of the bull market that started in 2009.

Others view the pandemic recession as the start of a new cycle. In their thinking, despite sky-high valuations, yields perking up, and day traders heading outdoors, a reasonable rebuttal is that bull markets basically never die this soon.

In 13 previous bull cycles in the past century or so, none ended at this point of the cycle -- if you consider March 2020 as the cycle’s start. Even the shortest one made it to two years. The average bull market lasted half a decade, with the S&P 500 climbing 10% in the second year.

It’s psychology. Confidence builds over months and years. The emotional journey from denial to acceptance to euphoria is long. Momentum builds slowly in the economy, too.

Granted, with the Covid-19 pandemic driving monetary policy and the economy into uncharted territory, nothing in the past may be a precedent for now. Still, regardless of the length of a cycle, investors would be better off holding onto stocks, a Bank of America study led by strategists under Savita Subramanian suggested. Her team compared the S&P 500’s performance in the 12 months before and after a market peak, and found that more than two-thirds of the time, the gains leading up to the terminal high were enough to offset subsequent losses.

“Just because we’ve never had a one-year-long bull market doesn’t mean we can’t have one,” said Chris Gaffney, president of world markets at TIAA Bank. “But I put more faith in the fundamentals, and right now the fundamentals show that equities are going to continue to go higher.”

Analysts are ratcheting up their first-quarter earnings estimates at the fastest rate since at least 2004. For the full year, S&P 500 earnings are expected to increase 25% to a record $172.90 a share this year, and rise at a double-digit percentage through at least 2023, analyst estimates compiled by Bloomberg Intelligence show.

Those estimates may prove conservative, according to Jonathan Golub, a strategist at Credit Suisse. During the previous two cycles, analysts who had underestimated corporate America’s earnings power at the initial stage of a recovery had to spend the first few years upgrading their estimates, according to the firm’s data.

“Now we have Biden rolling out the infrastructure plan so there’s a tremendous amount of policy stimulus there and in the pipeline,” said Ed Campbell, portfolio manager and managing director at QMA. “We’re going to see booming growth this year.