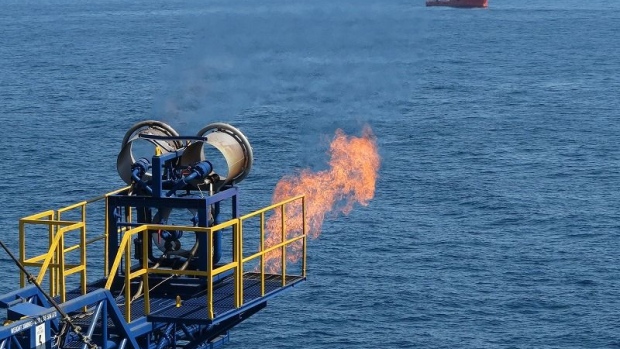 A flare is seen as gas from methane hydrate was produced from drilling in the Nankai Trough about 50 kilometers (31 miles) off the coast of Honshu island, Japan, in this handout photograph released to the media on March 12, 2013. , Akshat Rathi

A 30-year-old scientific tool has shaped how governments and companies measure their carbon footprints. But many experts contend that the approach is causing the world to underestimate the impact of methane.

In 1989, at one of the first meetings of the Intergovernmental Panel on Climate Change, a group of top researchers assembled by the United Nations, climate scientist John Houghton asked for a metric that would standardize the impact of all planet-warming emissions. That’s because each greenhouse gas—carbon dioxide, methane, nitrous oxide and so on—lingers for different amounts of time in the atmosphere, capturing different amounts of heat from the sun.

“When they argued that it was too difficult, Houghton insisted that they must, because they were the best people in the world to do this,” wrote climate scientist Katharine Hayhoe, who later became an IPCC author herself, in an obituary after Houghton’s death in 2020. The resulting tool was called Global Warming Potential and it allowed for a handy conversion between other gases and CO₂.

In its first report bringing together scientific knowledge about global warming, which Houghton edited, IPCC authors wrote this about the GWP: “It must be stressed that there is no universally accepted methodology for combining all the relevant factors into a single [metric]… A simple approach has been adopted here to illustrate the difficulties inherent in the concept.”

Nonetheless, that simple approach went on to become universally accepted methodology: a convenient shorthand for complex calculations that came with lots of caveats. The metric “has had a profound impact on climate action,” said Glen Peters, research director at the Center for International Climate Research.

In 1997, for example, many of the world’s richest countries signed on to the Kyoto Protocol, a treaty aimed a cutting emissions of various greenhouse gases. The agreement centered on credits that could be traded between countries so that rich nations could essentially pay emerging markets to reduce emissions or avoid polluting activities. It was GWP that allowed those actions to be converted into comparable CO₂-based tokens. An academic tool led to billions of dollars of real-world investment and has since become the basis of government and corporate climate policies everywhere.

One of the biggest uses of GWP is figuring out the warming impact of methane in the atmosphere. The measure says it’s approximately the same as 29.8 tons of CO₂, if measured over 100 years. Or it’s about the equivalent of 82.5 tons of CO₂, if measured over 20 years. Those GWP figures come from the most recent IPCC report, and they have been updated slightly each time the body publishes a new report every seven years or so.

Even though it’s been widely adopted, scientists haven’t stopped arguing about GWP. Many experts contend the tool is one reason why we underestimate the impact that reducing methane emissions will have on slowing global warming. That’s because GWP allows different CO₂-equivalent values based on the timeframe you choose. If you want your methane emissions to look less dangerous, choose the 100-year multiplier. That’s what most oil and gas companies do when they publish estimates of their greenhouse-gas emissions.

But a new study published last week in Environmental Research Letters from researchers at Stanford University argues that using 100-year GWP multiplier is incompatible with the goals set under the Paris Agreement. They conclude that, if the world wants to keep global warming below 1.5 degrees Celsius, then each ton of methane should account for 75 tons of CO₂ — significantly higher than the 100-year GWP often used.

Two weeks before that, a group of climate scientists, including Peters and Michelle Cain of Cranfield University, published a comment article in Climate and Atmospheric Science that went even further. It argued that countries and companies should set specific targets for gases, or climate forcers as scientists call them, such as CO₂ and nitrous oxide that stay in the atmosphere for a long time, and separate goals for gases such as methane and hydrofluorocarbons that degrade more quickly.

If these targets must be lumped together into some kind of CO₂-equivalent figure, they should apply the 100-year GWP multiplier for long-term greenhouse gases like nitrous oxide and the 20-year GWP for short-term greenhouse gases like methane. That might seem like a lot of math, but it’s not. Companies do these calculations anyway, but Peters, Cain and other authors of the study argue that by choosing to only use the 100-year GWP multiplier, they underestimate the real damage being done by methane.

Using the proper multipliers would also help drive home the power of cutting methane emissions. Most of the methane in the atmosphere today will degrade within 20 years and stop heating the Earth. That means cutting emissions has the same effect as physically removing CO₂ from the air — it won’t just slow warming, it will make the planet cooler within our lifetimes.