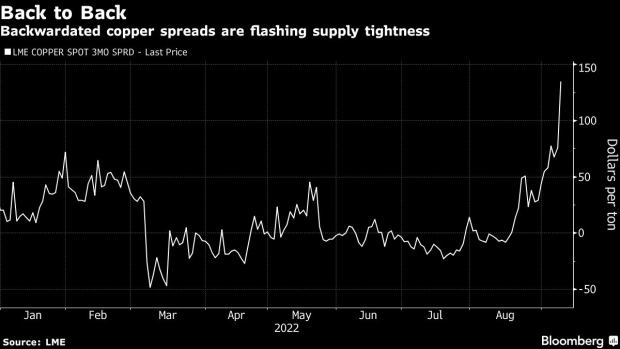 The premium for cash copper over three-month futures on the London Metal Exchange rose by as much as 91% Thursday to a high of $145 per metric ton, an indication the market is paying more for units right now. That’s the biggest backwardation since November last year.

Funds have historically bought and sold copper futures as a proxy for global growth, and the metal has declined 20% this year on fears of a recession. Still, the underlying physical market is robust, with Chinese copper imports ticking higher, while top producer Chile said exports were at a 19-month low. Copper on the LME rose 2.5% to settle at $7,810.50 a ton, the biggest gain in more than seven weeks.

“It doesn’t feel to me that anyone wants to be caught short on a price rally because the physical market is actually very strong,” Michael Widmer, head of metals research at Bank of America Corp., said by phone. “Europe is spending as much as possible on grids and renewables to become energy independent from Russia and China’s doing the same for de-carbonization reasons.”

Chinese imports of copper are up 8.1% in the year to August, according to customs data. That’s coming against the trend for other commodities, with crude oil and iron ore purchases posting significant drops year on year.

Zhengzhou, a provincial capital of some 10 million people, said all stalled housing projects should resume by Oct. 6, according to official media. The city urged developers to raise funds by selling other assets, and said the government will take over projects run by builders with liquidity difficulties.