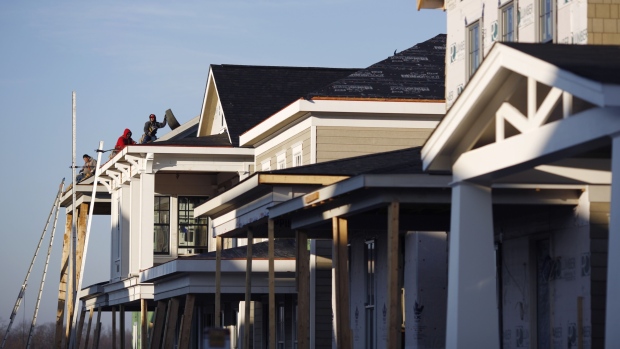 Reaction is pouring in to the Finance Minister Bill Morneau’s decision to adjust the stress test for insured mortgages in a move that would effectively make it easier to qualify based on current five-year rates. “This should add further fuel to a vigorous housing market,” is what the team at National Bank Financial told clients. “The psychological boost will be material,” according to the mortgage market experts at Ratespy.com, who say the feds perhaps should have deferred a few months beyond April 6 to avoid stoking the spring selling season. “The timing could hardly be worse,” warns Capital Economics, which notes home price inflation was already poised to “surge” amid tight inventory in certain markets – and reckons the new stress tests will further compel the Bank of Canada to stay on hold. We’ll continue chasing insight on what the new rules will mean for homebuyers, sellers, banks, and policymakers.

Canadian National Railway is temporarily laying off approximately 450 employees in Eastern Canada in the latest fallout from the blockade near Belleville, Ont. that’s choking off rail traffic across much of Canada (and this morning another rail blockade took shape on CN tracks near Edmonton). Meanwhile, dozens of business groups said in a letter to Prime Minister Justin Trudeau it’s “imperative that the government act now to get the Canadian economy moving again,” warning “countless” jobs are at risk, and saying law enforcement needs to be part of the equation for ending protests tied to the Coastal GasLink pipeline in British Columbia. We’ll speak with a couple of the signatories today.

Canadian stocks closed at yet another record high yesterday, with Barrick and other gold names leading the way (with BCE, our parent, and Shopify also among the top contributors). More than a month and a half into 2020, the composite index has closed higher in all but ten sessions so far this year.

“I take a little bit of offence when I hear that,” said Quebec Economy Minister Peter Fitzgibbon in reaction to Andrew Bell's question about whether government money has been misspent on the rapidly-shrinking plane and train maker. Fitzgibbon refused to take the bait when Bell pressed him to assess Bombardier’s management, though he pointed out Bombardier racked up its US$9 billion in debt on programs that “will give nothing to Bombardier going forward.” Check out the full interview here.

-Lightspeed shares fell in early trading after the company point-of-sale firm after a share sale was announced after yesterday’s closing bell.

-Inflation perked up in Canada in January, with total CPI rising 2.4 per cent - which marked an acceleration from December and also slightly above the average estimate. Gasoline prices were an obvious driver as they jumped 11.2 per cent year-over-year.

-B.C.’s finance minister unveiled a balanced budget yesterday that includes a record $22.9 billion in three-year capital spending. The fiscal plan also includes a new tax bracket for the province’s wealthiest one per cent.

-Alimentation Couche-Tard is facing a rival bidder for Australian gas station and convenience store operator Caltex, which announced it received a conditional cash and stock (in a yet-to-be listed entity) proposal from U.K.-based EG Group Limited.

-Nutrien will be a stock to watch today after the fertilizer giant reported a fourth-quarter adjusted profit that fell way short of the average estimate and tabled a 2020 profit range that largely misses estimates. CEO Chuck Magro is spinning positive, pointing to more than US$2 billion in free cash flow last year “in a very tough agriculture market.”

-WPT Industrial REIT announced late yesterday it’s buying 26 properties and some land in the U.S. from Pure Industrial REIT for US$730 million. The deal is being financed in part via a bought deal share sale and private placement at US$14.35 per share.