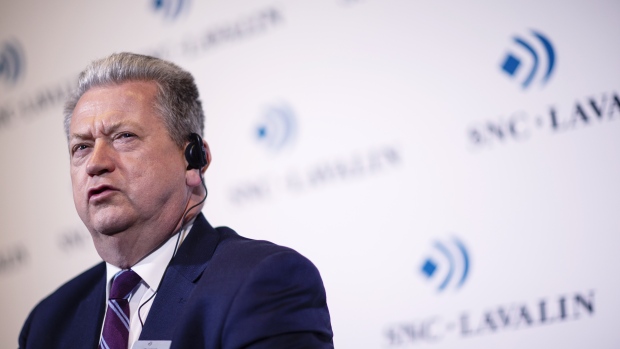 Neil Bruce is out as chief executive of SNC-Lavalin. The embattled engineering giant has appointed its chief operating officer Ian Edwards as interim CEO. And he's being tasked with the company's strategic direction.

CANADIANS FALLING BEHIND ON THEIR DEBTS

A new report shows Canadians are increasingly falling behind on their debts. According to Equifax, the 90-day delinquency rate on non-mortgage borrowings rose 3.5 per cent year-over-year in the first quarter. While the rate is still low, at 1.12 per cent, it could play into the hands of bears who’ve been warning about a looming wave of credit losses that will hit Canada’s banks.

Separately, it’s a good time to point out John Aiken at Barclays has downgraded CIBC, National, and Laurentian for a number of bank-specific reasons. Aiken joins us to discuss his calls at 10:05 a.m. ET.

LOONIE ON A ROLL

The Canadian dollar is into a fourth straight day of gains that have lifted it near its highest level since early March. We’ll try to square that up with recent predictions about the Bank of Canada being destined to cut its benchmark interest rate.

IN CONVERSATION WITH NATIXIS CEO

We’re sitting down this afternoon with Jean Raby, chief executive of Natixis Investment Managers – a global giant with almost a trillion U.S. dollars in assets under management. We’ll get his perspective on the markets, the economy, and macro factors driving it all. Watch for it in Bloomberg Markets.

That’s the basis for Canfor’s decision late yesterday to curtail production at all but one of its sawmills in British Columbia, taking out 200 million board feet of output in the process. The company said, point blank, the current environment is “uneconomic”. We’ll gather insight on whether this is enough to lift the company’s stock, which has plunged 48 per cent this year, and the broader outlook for the industry.

The Golden State Warriors were able to overcome another injury to star forward Kevin Durant last night, clawing out a 106-105 victory that extends the finals to a sixth game Thursday in Oakland. We’re looking forward to speaking with former MLSE VP Brian Cooper this morning on The Open.

-Worth keeping an eye on units of Allied Properties after the REIT announced it will raise at least $300 million in a bought deal financing priced at US$48.15 apiece. Units closed yesterday at US$49.63.