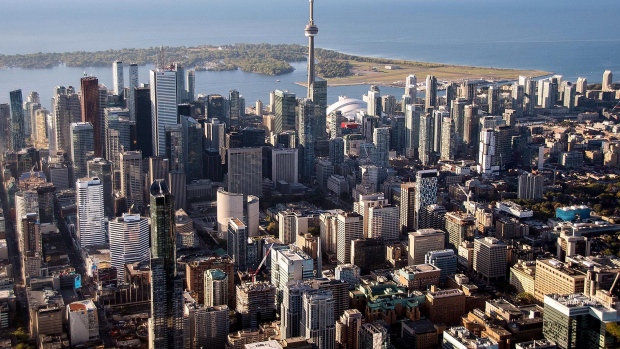 The CN Tower stands among buildings in the downtown skyline in this aerial photograph taken above Toronto , Photographer: James MacDonald/Bloomberg

The central bank left its benchmark rate unchanged at 0.25 today and indicated the economy has put the worst of COVID-19 behind it. In Tiff Macklem’s first day on the job as governor, the central bank declared the pandemic’s “impact appears to have peaked” and that Canada avoided the BoC’s own most-severe scenario. As a result, it has moderated its contraction forecast for the second quarter to a range of 10-20 per cent from its earlier warning the economy could shrink as much as 30 per cent in Q2. As for its rapidly-expanding balance sheet, the Bank says large-scale purchases will continue so long as there’s a need; it did, however, scale back some financing operations.

There are signs of life in the country’s largest housing markets. Greater Toronto Area home sales jumped 53 per cent month-over-month in May and the average selling price inched up to $863,599. While activity was still way below year-ago levels last month (similar to what we saw yesterday from Vancouver’s real estate board), at the very least we can say the market showed signs of stabilization after cratering in the immediate aftermath of COVID-19 lockdown and social distancing measures.

One day after Huawei was left out from a pair of 5G supply announcements by Bell and Telus, and as tension between D.C. and Beijing remains thick – with Canada caught in the middle, today we’ll get unique insight into how China operates and what the future holds for its role in the world. Long-time former U.S. senator Max Baucus, who also served as America’s ambassador to China, joins Jon this morning at 10:40 a.m. ET. Don’t miss it.

West Texas Intermediate crude abruptly turned sharply lower around 6am ET, after earlier climbing above US$38 per barrel this morning to the highest level since early March. The southward move came after our Bloomberg partners reported on an internal OPEC+ dispute about compliance that could be getting in the way of extending production cuts.

That’s the message from 133 chief executives who signed off on a statement released by the Business Council of Canada, denouncing racism in the aftermath of George Floyd’s killing and ongoing protests in the United States and beyond. The signatories tout their commitment to diversity and inclusion while acknowledging “we can and must do matter.” Big question is what else will be done in practical terms to effect change. Should be noted BMO Financial Group announced this morning it will donate $1 million to North American organizations in support of social and racial justice. We’re trying to speak with some of the Council’s members, which reads like a laundry list of Canada’s most influential executives.

-Canada Goose warned today the worst is yet to come in its financials as a result of COVID-19. The parka maker said it's expecting to generate "negligible" revenue in the fiscal first quarter ending June 28. It's also declining to provide a full-year forecast due to all of the uncertainties relating to the pandemic. In the quarter ending March 29, Goose's adjusted net loss was in line with estimates while revenue narrowly outpaced the average estimate.

-Aurora Cannabis is exiting its investment in Alcanna via a bought-deal share sale priced at $3.00 apiece. Alcanna shares closed at $3.19 on the TSX yesterday.

-AMC Entertainment will be a stock to watch today after the theatre operator warned it could take up to a US$2.1 billion impairment charge in the first quarter. Also said it expects to report US$941.5 million in revenue for the quarter ending March 31, compared to $1.2 billion a year earlier.

-A titan of Bay Street is retiring from the board of the company he co-founded. GMP confirmed this morning that Gene McBurney is stepping down from the company’s board of directors. The company said he’s leaving “to pursue other opportunities” in capital markets.

-Shares of Zoom Video Communications will be on our radar today after the WFH beneficiary jacked up its full-year forecasts and set second-quarter revenue and profit targets that are miles ahead of the average analyst estimate. The video conferencing service provider posted a 169 per cent surge in first-quarter revenue late yesterday afternoon amid substantial growth in paying customers.