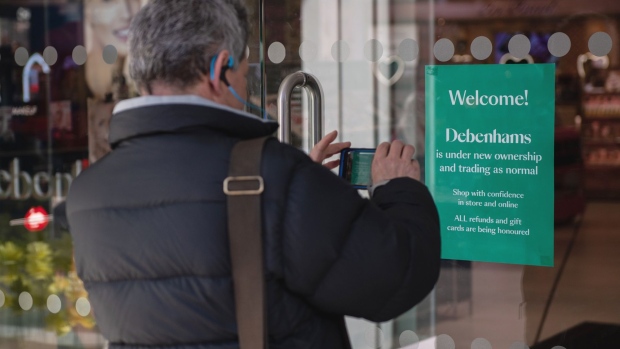 (Bloomberg) -- When the northern city of Leeds began setting up its retail skills training center, manager Dianne Wainwright knew that one of her biggest problems was simply getting people in the door.

She knew there was an audience, but she had to find a way to fit into the schedule of workers -- often women -- trying to juggle family life and caring commitments around long hours on the shop floor.

Getting workers up to speed on everything from digital skills and visual merchandising to functional math is becoming more pressing as major chains such House of Fraser, Mothercare and ToysRUs shutter stores and shift online. The employees being left behind are predominantly female, often facing high barriers to securing new positions in a changing workplace, even when initiatives like Wainwright’s Ambition Leeds are stepping in.

It’s a particular problem for Britain, which really is a nation of shopkeepers. Retail is the largest private sector employer with 2.9 million people. Of the sales assistants and cashiers on the front line of stores, around seven in 10 are female, according to the Annual Population Survey.

But while you’re still likely to hear a female voice at the grocery store checkout, it’s increasingly likely to be a machine. Self-service checkouts and home delivery are now ubiquitous. J Sainsbury Plc, the second largest supermarket chain, is even trialing an entirely till-free store in central London, meaning the kinds of jobs available are shifting away from the female dominated end to those more usually held by men.

“Work is gendered,” said Vivian Hunt, managing partner for the U.K. and Ireland at McKinsey. “The further you go back in the supply chain, in manufacturing and warehousing, there are fewer women but those jobs are a little slower to be automated. It’s the customer facing, customer service roles, it’s the call support centers, the back office jobs with low physicality. These roles are more vulnerable.”

The Office for National Statisticsestimates that about two-thirds of cashier, sales and retail assistant jobs are at high risk of being replaced by technology. Of the 108,000 job losses in sales and customer service occupations between 2011 and 2018, almost three quarters were women, according to analysis by the Royal Society for the Encouragement of Arts, Manufactures and Commerce.

At department store Debenhams, many workers face an uncertain future. It may close as many as 22 locations next year as part of an agreement with creditors to save the company.

Ex-retail workers are staying unemployed for longer. About 40% have been unemployed for six months or more, the second-highest of all sectors and a stark turnaround from before the global financial crisis, when they had among the shortest periods of unemployment, according to the Resolution Foundation.

Overall, 70% of roles at high risk of automation are currently held by women, according to the ONS. McKinsey estimates that one-in-four working women will need to substantially re-skill -- and probably more in retail.

For bosses, a tight labor market and lack of qualified candidates means redeploying existing workers is increasingly attractive. Employment is near record highs and the jobless rate is below 4%. McKinsey estimates the cost of retraining an employee is around 10% of their annual salary, while replacing them can cost as much as 30%.

Retraining isn’t always that simple, though. Despite huge changes in attitude over the past century, women in still spend an average 23 hours per week caring for family members, more than double the time spent by men. As a result they may not be able to commit additional -- and usually unpaid -- time to learning outside working hours.

Mobility is also an issue for women who are likely to earn less than their partner. Wider caring responsibilities may also mean they need to remain close to elder family members, or near to childcare for their own kids.

For Wainwright and the team at Ambition, the answer was to fit around the lives of those it hopes to reach. That means opening early, for pre-work sessions, and late, with at a location right in the center of the retail district.

“When we’re running a breakfast session, people know that they can leave here and be at work literally within five minutes,” Wainwright said. “The money could be invested in retraining them. It makes far more sense than getting rid of people.”

To contact the reporter on this story: Lucy Meakin in London at lmeakin1@bloomberg.net

To contact the editors responsible for this story: Paul Gordon at pgordon6@bloomberg.net, Brian Swint, Fergal O'Brien