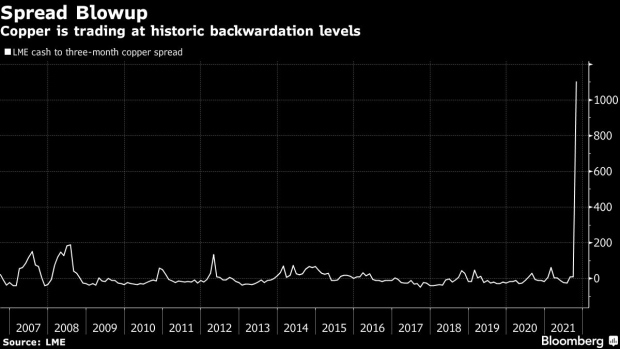 Copper tracked by London Metal Exchange warehouses that’s not already earmarked for withdrawal was near the lowest since the 1970s on Tuesday. The dramatic 88% drop in available stockpiles this month has been driven by a steady flow of orders to take metal out of European depots. And while the record spot premiums should typically start attracting metal back into the warehouse network, there’s little sign of that happening so far.

The flash squeeze that’s emerged on the LME is an extreme example of the supply shortages that are cropping up across commodities markets as surging power costs imperil production and Covid-19 snarls up global supply chains. Following similar squeezes in the tin and lead markets, fears over critical shortfalls have now reached buyers in the biggest base-metals market.

The squeeze has helped underpin a surge in prices -- benchmark futures have jumped 10% in the past week and are closing in on a record. Spot contracts have rallied even more sharply and cash prices have soared past previous all-time highs struck in May.

The blowout in spreads has drawn the attention of the exchange -- the LME said Monday it was monitoring the situation closely and has options to ensure an orderly market is maintained.

“This is an extreme situation,” Oliver Nugent, metals analyst at Citigroup Inc., said by phone from London. “Across metal markets, one of the big themes has been consumers wanting to build up their working inventories, and that’s escalated a lot of the tightness.”

The surging spread between spot and futures contracts is known as a backwardation, and it can create huge problems both for consumers, whose purchase contracts often reference cash prices, and investors who have sold futures and need to buy their positions back before they expire.

The unprecedented backwardation also means that anyone with metal in hand could make an annualized return of about 40% by selling their metal via the spot contract, and buying it back later via three-month futures. So far, that huge delivery incentive isn’t attracting much metal back into the LME warehouse system, but that will probably change soon, Nugent said.

“It’s highly likely that we will see more metal diverted on to the exchange,” he said. “It’s hard to see a bigger motivation than delivering metal on to the LME.”

After a small delivery on Monday, on-warrant stockpiles declined again on Tuesday, reaching just 15,225 tons, within touching distance of a 47-year low struck last week. The cash-to-three-month spread was trading at $740 a ton on Tuesday, after closing at a record $1,103.50 a ton on Monday.