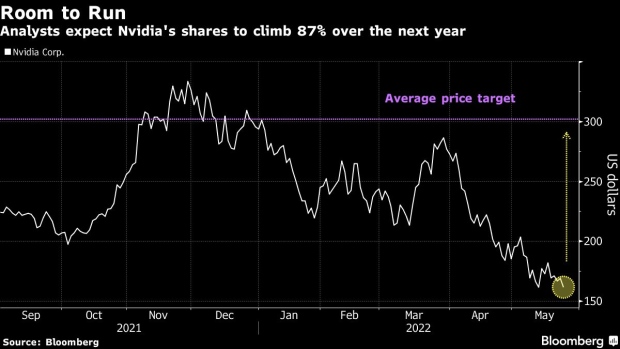 (Bloomberg) -- It’s only six months since Nvidia Corp. was being hailed as Wall Street’s next $1 trillion tech stock. The memory now seems distant.

Having soared to a record peak back in November, the chipmaker has pretty much given back all its gains of the last 12 months, rattled by this year’s rout in high-valuation stocks. For investors wondering where the stock is headed next, first-quarter earnings due after US markets close on Wednesday will provide a stern test.

Analysts expect the results to show robust growth with profit and revenue projected to climb more than 40% each in the three months ended March 31, according to data compiled by Bloomberg. Yet as the likes of Snap Inc. and Netflix Inc. have shown, the market has little tolerance for disappointment right now. And with Nvidia still trading at relatively high multiples, it can’t afford any slip ups.

“It’s hard to be negative about Nvidia’s long-term prospects, but the stock is still pretty damn expensive, and we don’t think the market has bottomed on growth stocks,” said Tom Plumb, manager of the Plumb Balanced Fund. “Given where sentiment is, there’s a high bar for what kind of results would be a positive catalyst, and a low bar for what would disappoint. An in-line report won’t be enough.”

This earnings season, Wall Street has been rewarding companies that provide clear guidance on how they’ll handle slowing economic growth, supply chain issues and inflationary pressures, while punishing the rest. Earlier this month, Advanced Micro Devices Inc. gained after giving a strong sales forecast for the current quarter. In contrast, Snap posted its worst day on record Tuesday after the Snapchat parent cut its revenue and profit forecasts.

Nvidia’s stock has been pressured this year by many of the same factors that have weighed on the semiconductor industry this year, notably lockdowns in China that have exacerbated supply chain headwinds and contributed to sky-high inflation, which has prompted aggressive rate hikes from the Federal Reserve.

Yet despite being the worst performer in the Philadelphia Stock Exchange Semiconductor Index in 2022, the shares still aren’t cheap, trading at around 11 times projected sales with an earnings multiple of 27. That compares with multiples for the industry benchmark index of 4 times and 14, respectively.

Wall Street analysts, however, remain bullish, even in a market that has turned on high-valuation growth names. All but one of the 50 brokerages that follow Nvidia recommend investors hang on to the stock or buy more, with an average expected return of 87% over the next year. Such a rally wouldn’t be unprecedented. In the past decade, the stock has soared almost 5,600%, including dividends, compared with a gain of 808% in the chipmaker index.

“Nvidia has historically paid you pretty well to get more aggressive,” said Eric Clark, portfolio manager at Accuvest Global Advisors, who looks for the stock to trade around $135 or $140 before adding to his own position. It last closed at $161.54.

“The macro is driving the bus right now, but it’s kind of a positive that sentiment is so bad,” Clark said in a phone interview. “Fundamentals don’t matter much right now, but there’s still a massive opportunity looking out over a five-year horizon.”

And long-term prospects continue to look strong. Nvidia is expected to report full-year revenue growth of about 29%, compared with the 19% growth expected for the overall semiconductor sector, according to data compiled by Bloomberg. Adjusted earnings are seen rising about 28% for Nvidia’s fiscal 2023, above the 19% earnings growth anticipated for the sector.

Amazon.com Inc.’s market value is inching closer to falling below the $1 trillion milestone. Its shares collapsed last month, with a one-day loss in its market capitalization that ranked as one of the worst in Wall Street history, after the e-commerce giant gave an outlook that was seen as disappointing. That, combined with the selloff in richly valued tech stocks, has seen the share price drop 38% this year, cutting its value to $1.06 trillion.