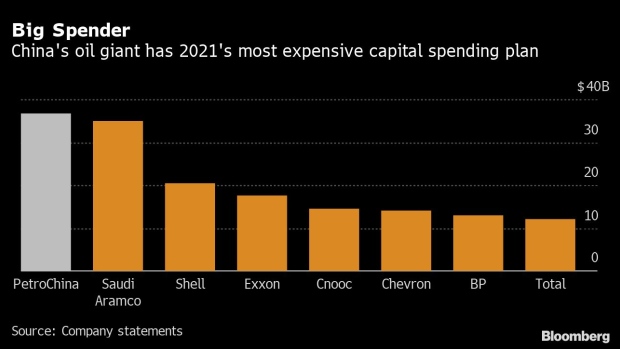 (Bloomberg) -- China’s fear of dependence on foreign suppliers means its biggest oil company plans to be the world’s top-spending driller this year, even as it says the nation’s demand for crude is plateauing.

China’s quick recovery from Covid-19 means that its demand for oil and gas has fully recovered from the pandemic-induced swoon of early 2020, and President Xi Jinping continues to make energy security a top priority. The government earlier this month called for increased domestic production of coal, oil and gas over the next five years, an effort that’s ostensibly at odds with Xi’s long-term plan to decarbonize the economy.

The nation’s demand for crude oil has already reached a plateau, and refined product consumption will peak and begin to decline in the next decade, Duan Liangwei, PetroChina’s outgoing president, said on a conference call Thursday. Demand for natural gas, one of the cleaner fossil fuels, is still expected to grow, and PetroChina is focusing its upstream operations there.

Cnooc Ltd., the country’s biggest offshore driller, is budgeting 90 billion to 100 billion yuan in spending for this year, compared with a bit less than 80 billion in 2019, although the figure could still be adjusted, Chairman Wang Dongjin said Thursday during the company’s annual earnings call.

Still, PetroChina’s world-leading capex plan doesn’t compare to pre-pandemic levels. The firm had intended to spend 295 billion yuan last year, before lockdowns beginning in January crippled the economy. It ended up shelling out about 246 billion yuan.

PetroChina and Cnooc, along with China’s third oil major Sinopec, were forced to cut spending as oil prices cratered on the impact of the pandemic in 2020. Crude has rebounded this year amid production cuts and optimism that vaccines will help revive demand. Sinopec reports its earnings on Sunday.

Their focus on fossil fuels aside, China’s oil giants are still expected to help the country meet its ambitious goal of reaching net-zero emissions by 2060. PetroChina didn’t identify spending targets on green energy on Thursday, although it did say it planned to incrementally increase such spending every year going forward.

The company is looking to peak its carbon emissions by 2025, and achieve “near-zero” emissions by around 2050, although it didn’t specify whether that relates only to its own operations, or whether it includes the much vaster challenge of accounting for the emissions from the fuel it sells.

Chairman Dai Houliang said the company plans to utilize wind, solar and geothermal resources and boost industrial use of hydrogen. For its part, Cnooc said it will increase its proportion of natural gas production to 30% by 2025, and expand its offshore wind power business in coming years.