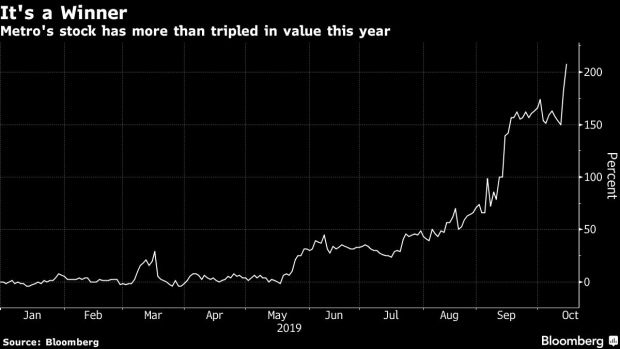 (Bloomberg) -- The standout winner from the worst day for Turkish stocks since March is a stock that’s majority owned by a man convicted of inciting murder.

Istanbul-based Metro Holding, whose founder Galip Ozturk is in self-imposed exile due to a prison sentence at home, was the only stock in the benchmark Borsa Istanbul 100 Index to soar on Monday. It jumped as much as 15% on the worst day for the gauge since March. Two other equities gained, but their advance was less than 0.3%.

“People with stoked up national feelings are buying national companies,” said 54-year-old Ozturk, who owns about 43% of the shares. Metro Holding is a prime example, he said by telephone from Georgia, without explaining explicitly why the conglomerate, which operates long-distance buses, has benefited from tensions between the U.S. and Turkey.

The stock was already at the highest level in a decade when it rose to 2.34 liras on Monday, taking its advance this year to more than 200%. That’s despite Metro Ticari ve Mali Yatirimlar Holding AS, as the company is officially known, posting only one quarterly profit over the past 12 months.

Getting a straight answer on why the stock has risen is challenging, given that there are no analysts covering the security, according to data compiled by Bloomberg.

That said, data shows that small transactions were made throughout the day, some as little as one share, suggesting that retail investors may have bought the equity, possibly on the back of Ozturk’s allegiance to President Recep Tayyip Erdogan. He once described the president in a 2016 interview with Bloomberg as “the greatest leader in the 1,000-year history of the Ottomans.”

But in spite of his devotion, he had to flee Turkey to escape a lifetime in prison after the Court of Appeals approved his sentence for inciting murder more than two decades ago. Ozturk maintains innocence and said his demand for retrial has been accepted. He resigned as chairman of Metro in 2017, which is currently being led by Fatma Ozturk Gumussu, his daughter.

Metro’s advance on Monday defied a sell-off that wiped out billions in the market value of Turkish stocks. The rout was spurred by the prospect of more U.S. sanctions on Turkey for the nation’s military operation in Syria. Bonds fell, as did the lira, even though state banks were supporting the currency.

Metro advanced steadily for most of the session, with traders exchanging over 30 million shares, well above the stock’s total volume for all of last week. It was up 9.4% at the close in Istanbul, compared with a 5.1% drop in the main gauge.

“We stand with our government,” Ozturk said, in response to U.S. President Donald Trump’s warning that the U.S. would “wipe out” the Turkish economy if the military doesn’t act humanely in its operation into northern Syria. “If we were the type to kneel before threats, we wouldn’t have started this operation in the first place.”

To contact the reporter on this story: Taylan Bilgic in Istanbul at tbilgic2@bloomberg.net

To contact the editors responsible for this story: Onur Ant at oant@bloomberg.net, Dana El Baltaji