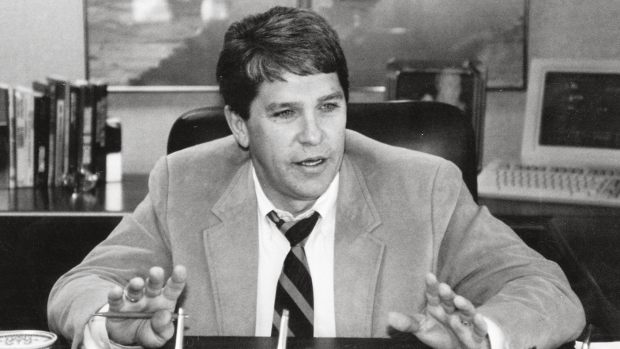 A photo of Hunter Harrison from the new book, 'Railroader: The Unfiltered Genius and Controversy of Four-Time CEO Hunter Harrison'. , Handout/Page Two Books

In this book excerpt from Railroader: The Unfiltered Genius and Controversy of Four-Time CEO Hunter Harrison, which comes out Sept. 18, the long-time railway executive makes his mark as soon as he walks into Canadian Pacific Railway's head office for the first time.

IT WASN’T A good start. Hunter Harrison walked into CP’s head office for the first time at the beginning of July 2012. Other than Harrison and his chief of staff, Mark Wallace (who’d rejoined his old boss after an interlude working in other industries), there were few senior people in the office. One was Peter Edwards, the VP of human resources who had helped devise and run the Hunter Camps at CN and co-written Harrison’s two manuals. The other was Paul Guthrie, CP’s chief legal officer. Guthrie was wearing a cowboy hat, cowboy boots, and jeans. He recalled Harrison looking at him and saying, “Who the fuck’s this guy?” Harrison wanted to know, “What the shit is goin’ on?”

“It’s Stampede,” said one of the secretaries.

“Who gives a shit it’s Stampede? This company hasn’t made a penny and we’re worried about Stampede, having a few shooters at noon?” While the annual Calgary Stampede is huge in the life of the city, being absent that morning wasn’t the way to make a positive impression on the new boss.

Guthrie’s office was right next to Harrison’s. He could hear the new CEO hollering through the wall. Harrison wanted action and he wanted it fast. Guthrie quickly learned his new boss had no tolerance for lawyers like himself telling him they’d have answers to his questions in six weeks. But Harrison would also use his gruff sense of humor to disarm Guthrie, telling him that his “judgment had been clouded” by the fact that he’d had legal training.

Once people were back in the office from Stampede, Harrison immediately began assessing them. According to Guthrie, “He made quick decisions. Okay, I’ve spoken to you for two minutes and I don’t think you’re needed on the voyage.”

Harrison also didn’t like head office, which he called the “glass house” in downtown Calgary. It would not be long for this world. For starters, he didn’t like floor-to-ceiling windows.

It was also the opposite of what he thought a revamped railroad needed—in-your-face contact with railcars. Harrison would soon announce that he was relocating head office to a rail yard. CP’s headquarters would be where the action was—next to the tracks. That would be at Ogden yard, which, when Harrison went to see it, was covered in graffiti. The lease was coming up for renewal at the office downtown, and he told Wallace they were getting out of it. Fortunately, Conoco-Phillips was looking for space and paid CP a $5 million bonus to move out quickly. Building a new headquarters at Ogden would cost $38 million, but Harrison said the company saved between $20 and $25 million by being out of downtown, so the new space paid for itself in a year and a half. Ogden not only includes the control center for the entire railroad, directing approximately four hundred trains a day and some 50,000 railcars, but also has a gym, running track, and sumptuous executive offices. This was all in keeping with Harrison’s view that it was important to work in comfortable spaces and put forward your best.

Like he had done at CN, Harrison also visited the mail room, a place he believed sent profound signals about a company. To him, it looked “like Sanford and Son,” a reference to the 1970s sitcom about a junkyard. But instead of an irascible Fred Sanford and his frustrated son Lamont, the CP mail room was staffed that day by a woman who Harrison said was “scared to death” of the fire-breathing new CEO prowling around her lair. Scanning the room, Harrison noticed a large FedEx box with several laptops inside, sitting on a scale.

She told him it was being shipped to Alyth, a nearby yard in the southeastern part of the city.

“We use FedEx? To go to Alyth?” Harrison asked, dumbfounded. “To go eight miles away?” Her day was about to get worse.

“Young lady,” Harrison said, “Do you know where it goes? It goes to Memphis [then FedEx’s main hub]. I can put it in the back of my car and have it there in two minutes.”

It might have taken him more than two minutes, but the point was made. Things would be done differently. Like at CN, nose-to-nose encounters with the new chief had a way of resonating throughout the organization. Harrison also said he made a point of breaking something while he paid his visit. In fact, he didn’t hide the fact that he did, in such situations, purposely break a piece of equipment or throw something out the window—a phone, for instance—to send a message that quickly spread. Although he denied that his purposeful performances created a culture of fear, those on the receiving end could be forgiven for feeling differently. He was nothing if not an expert at getting his point across, in a way that suggested serious consequences if he was not obeyed.

“He really meant that. I better do it,” was the signal, loud and clear. Harrison knew he could be viewed as a “time bomb,” and for the most part he didn’t care, although he was highly sensitive to criticism that he was mean or had created an environment where employees were scared of him.

Guthrie saw it differently. Yes, Harrison was very direct. “But it was always on the basis of ‘this is what we need to do in order to succeed.’” He said Harrison was “incredibly inclined to educate people” and gracious to those who wanted to learn. He’d get out charts and explain where they’d gone wrong the night before with their operating plan. “He explained it,” Guthrie said, adding, “I bought into it.” Guthrie was unlikely to be cowed. He was an experienced, older lawyer, former marine, and former police officer. Still, whatever your rank, the worst thing you could do was lie, Guthrie said. “He [could] smell a lie. You can do anything but tell a lie.” Guthrie managed to survive the transition from the old CP to Harrison’s CP. Now back in private practice in Calgary, he maintains Harrison was able to get people to follow, calling him “the best leader of all the people I’ve had as leaders.”

One of those who followed was Nadeem Velani, who’d been Harrison’s chief of staff at CN after Mark Wallace. In 2013, Velani went to work at CP. “I missed the action of being in the midst of it all,” Velani said, “getting a second chance to work with Hunter.”

Velani had moved to Canada from Nairobi when he was two years old. He couldn’t get over the fact that an immigrant from East Africa had prospered under the tutelage of the street fighter from Memphis. He rose from trainee at CN to investor relations to chief of staff. He conceded, however, that while working for Harrison at CN, he paid a personal price. Velani didn’t take a vacation for four years.

“You could never turn off,” he said. “The railroad doesn’t turn off.” Velani’s words could have come out of Harrison’s mouth. It had, however, paid off career-wise. Velani ultimately rose to become CP’s chief financial officer after the company went through several who didn’t last. He believed Harrison got the best out of people, but they had to buy in just as he did. When he awoke at four in the morning, unable to sleep, Velani would check the railroad’s daily revenue tally. Harrison trained people to care so much, they worked around the clock.

It wasn’t long before Harrison’s tried and true efficiency practices started to kick in at CP. “No quits, locomotives, the car fleet, the down-sizing . . . the standard story,” he said. One of the first questions he asked was how many employees there were.

“I don’t think anybody knows,” he was told. “It depends on how you want to count it.” For starters, the company had a different head count depending on the season, not to mention contractors and consultants. Once again, it was not what you wanted to tell the new CEO, but better to tell the truth than to fudge it. When it was clear he wasn’t going to get an answer, he had a suggestion.