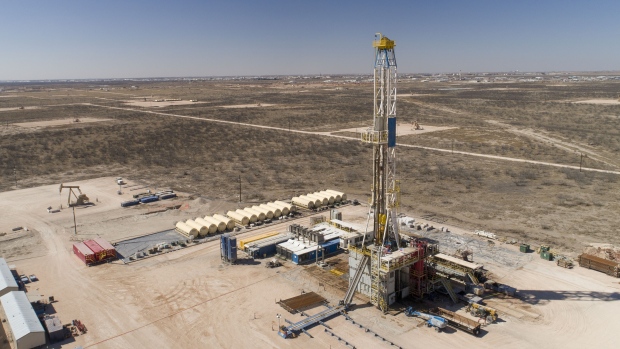 A Nabors Industries Ltd. drill rig stands over an oil well for Chevron Corp. in the Permian Basin in this aerial photograph taken over Midland, Texas, U.S., on Thursday, March 1, 2018. , Bloomberg News

The promise of the Permian is shrinking.

Producers in the nation’s oil-rich shale basins are dialing back growth plans in the face of a growing panoply of problems that’s killing returns, and keeping skeptical investors away.

The constraints are manifold: pipeline limits, reduced flow from wells drilled too close together, low natural gas prices and high land costs. But the most consequential is that shale-well production falls off at such a high rate -- as much as 70 per cent in the first year -- that you need to keep spending cash on new wells just to maintain output.

In the five years since oil fell below US$30 a barrel from more than US$100, a resilient shale industry has established the U.S. as the world’s top oil producer. Now, cracks are opening in that survival tale, with companies ranging from EOG Resources Inc. to tiny Laredo Petroleum Inc. dropping their 2019 growth rates by 3 percentage points to more than 40 below last year’s gains.

“You’re having to spend more and more every year to grow at a faster rate,” said Noah Barrett, an energy analyst at Janus Henderson, in a telephone interview. “Companies routinely spent 120 to 130 per cent of their cash flow never generating positive cash flow or earnings.”

In the early years, Wall Street had been happy to fund shale growth, framing the budding sector as a young, technology-driven industry, ripe for future returns. But as the shale fields aged, the returns never came and shareholders are now pushing for payback at the expense of additional oil growth.

Most of the independent producers cut their capital budgets after oil prices slipped at the end of last year. While companies including Diamondback Energy Inc. and Devon Energy Corp. have bolstered buybacks, investors warn there’s a long road ahead to recovery.

“They’ve been burned so many times in the past that there’s deserved skepticism” toward energy stocks, according to Barrett, whose firm manages $328 billion. “Just when we get progress, managements have short memories and start spending capital in an undisciplined manner.” 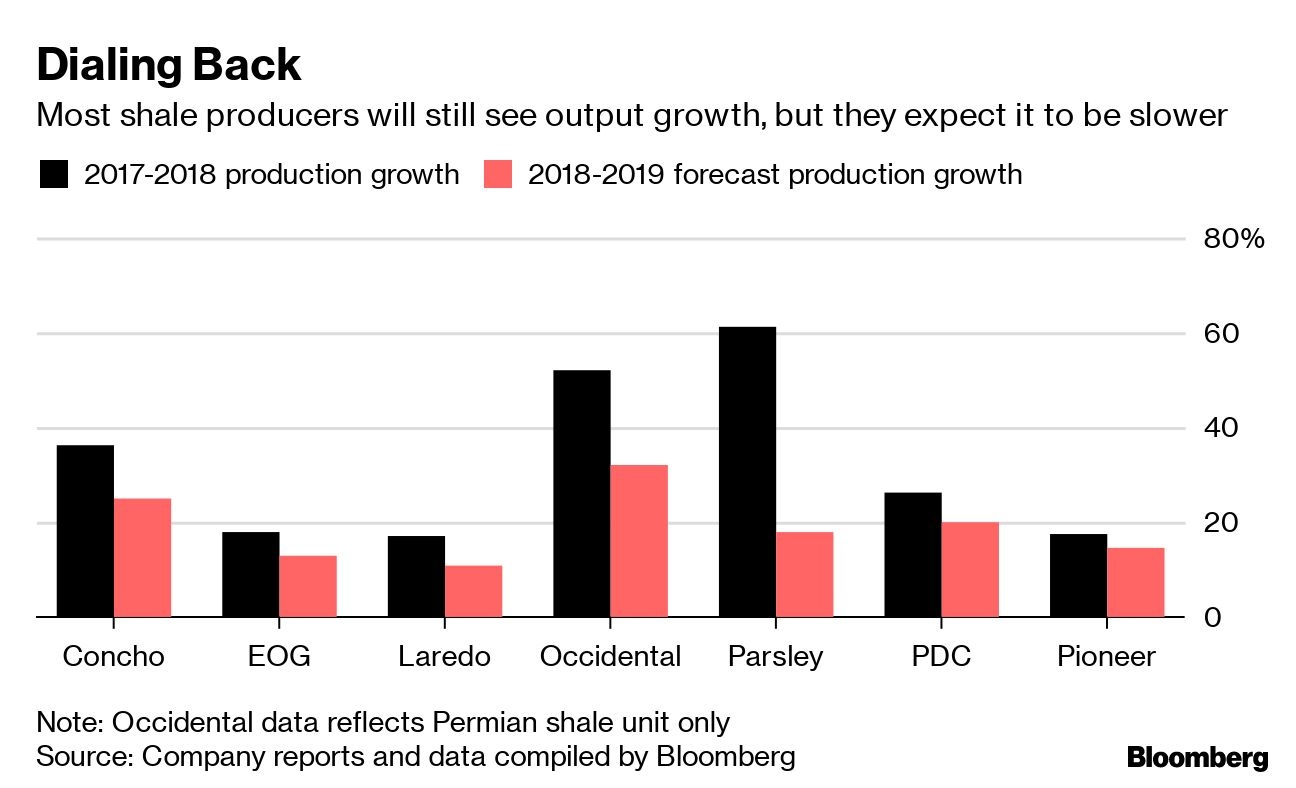 The smallest companies have been among the hardest hit.

Times should be good for Legacy Reserves Inc. and Approach Resources Inc., two small producers working in the oil-rich Permian. Crude prices are edging up, and big drillers want to expand there. Yet they’ve lost 99 per cent and 87 per cent of their market value in the past year, and Legacy last month filed for Chapter 11 protection.

But it’s not just the minnows that are struggling. Bigger producers, including Parsley Energy Inc., QEP Resources Inc., Centennial Resource Development Inc., SM Energy Co. and Cimarex Energy Co. have all lost between 42 per cent and 59 per cent of their market value in the past year. Meanwhile, the price of West Texas Intermediate crude, the U.S. benchmark, is only down 14 per cent.

For the biggest companies -- majors such as Exxon Mobil Corp. and Chevron Corp. -- battling decline rates means drilling so many wells that they create a long, low-decline tail of production that makes money for years with little reinvestment. But that takes time and a lot of money, a luxury not available to many independent players.

Stock offerings last year were the lowest since at least 2006 and were down more than 60 per cent versus 2017. With public capital harder to come by, producers including Pioneer Natural Resources Co., Devon Energy Corp. and Apache Corp. have sold off less-important acreage as they seek to tap their most productive acreage.

Other producers are tapping private capital to help drill wells outside of their regular capital expenditure program. One private equity firm puts the number of so-called DrillCo deals at more than US$5 billion since mid-2015.

In those arrangements, private equity investors pay to drill certain areas outside a producer’s budget. Once oil flows, the buyout firm receives the majority of the cash flow, but when costs are repaid and investors earn a pre-agreed profit, revenues revert to the producer.

The strategies may be different but the goal’s the same: “It’s really just designed to accelerate this free cash flow generation, and get these companies to try to prove earlier to investors that they are good businesses,” said Rob Thummel, managing director at Tortoise, which handles energy-related assets.

Such measures mean the U.S. will continue to see shale production, but the explosive surges of the past may be over, according to Janus’s Barrett.

“U.S. production in absolute terms will continue to grow,” he said. “But the pace of production increases will slow.”