Even the disapproval of the U.S. government may not be enough to prevent the Swiss National Bank from intervening in the currency market, according to strategists at MUFG Bank Ltd. and Commerzbank AG.

The Swiss franc reached its highest level since April 2017 against the euro on Tuesday after Washington added Switzerland back to its currency watch list and urged the country to adjust its macroeconomic policies. Yet strategists say Switzerland’s growth and inflation data could make the case for the SNB to continue buying foreign currency in an effort to curtail the franc’s appreciation.

“We know from the SNB’s intervention activity that the franc is already at critical levels, i.e. at levels at which it has intervened before last year,” said Thu Lan Nguyen, a strategist at Commerzbank. “There is a high likelihood that it will step into the market, or is already active.” 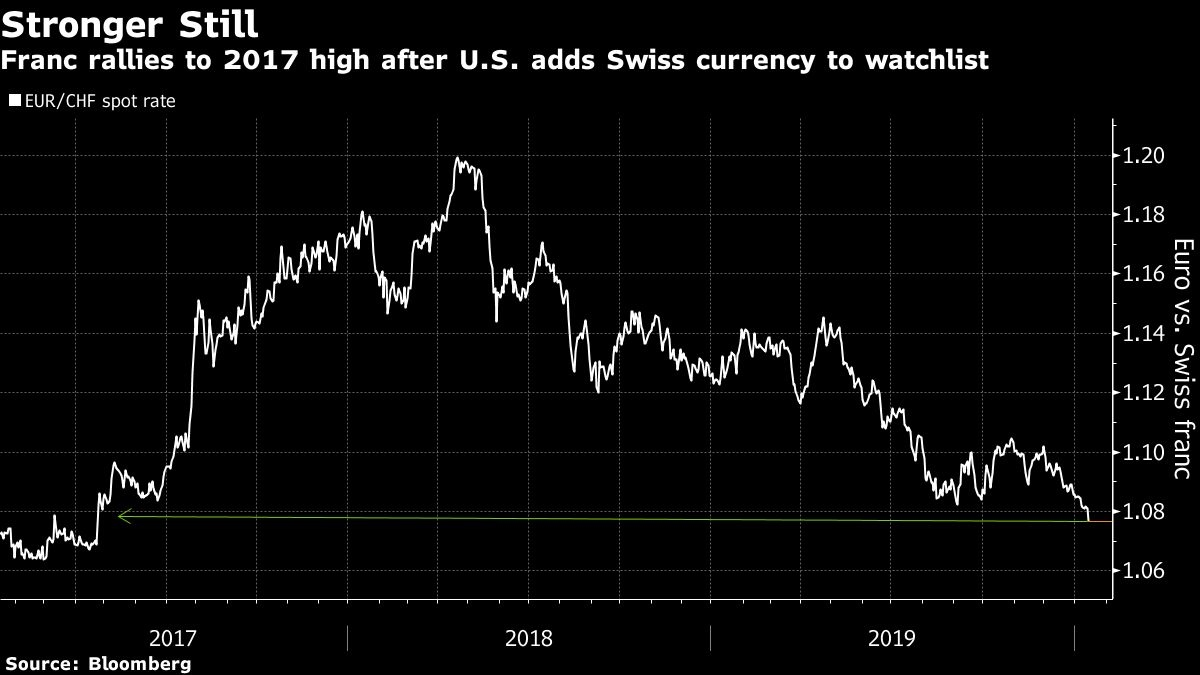 SNB data in August suggested the bank had pumped billions of francs into markets, buying foreign currency in an effort to curb the franc’s strength. The SNB said Tuesday that its interventions were designed only to offset the ill effects of too strong a currency. The interventions, which aren’t aimed at giving the nation a competitive advantage, are disclosed in an annual report, the SNB said in a statement.

Five years since the SNB jolted markets by scrapping a cap on the franc and introducing negative interest rates, the currency’s strength means there’s little chance it will be able to end the policy any time soon. The other countries on the Treasury’s monitoring list are China, Japan, South Korea, Germany, Italy, Ireland, Singapore, Malaysia and Vietnam. It removed the tag of currency manipulator from China.

The U.S. decision on Monday “encouraged market participants to test the SNB’s appetite to keep intervening to dampen Swiss franc strength,” said Lee Hardman, a strategist at MUFG Bank in London. “We still think the SNB will continue to intervene after the U.S. Treasury announcement, but it has created some additional uncertainty in the near-term which the market is testing now.”