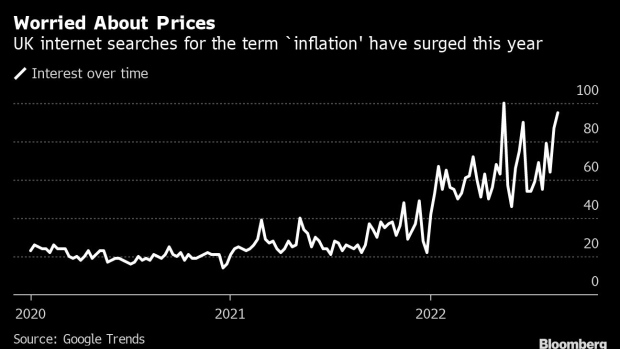 The UK government’s £400 payment to help households with surging energy bills could be about to shake inflation markets and the nation’s stretched finances.

The Office for National Statistics will announce Wednesday whether the £12 billion ($14 billion) in aid, which will be spread over six months, should be considered an income adjustment or a price adjustment. If the latter, that will ease official inflation figures in the coming months.

It’s a technical decision that won’t reflect consumers’ experience of the cost-of-living crisis, and is unlikely to pull benchmark gilt yields back from the highest level in eight years. But it will have far-reaching consequences elsewhere, including for payouts on some inflation-linked securities and government finances.

Deutsche Bank estimates that subtracting the rebate will reduce the Retail Prices Index, which determines payments on UK inflation-linked debt, by about 2.7 percentage points. That would lower the debt interest bill by around £14 billion this year, according to Bloomberg calculations based on Office for Budget Responsibility data. RPI is also tied to some consumer products, such as mobile phone tariffs.

Such savings would be welcomed by the government, which is under intense pressure to spend even more in response to the surge in energy costs. A similar reduction in the Consumer Prices Index, and a potentially lower path for interest rates as a result, could also save the government billions.

Based on CPI, UK inflation is already above 10%. The Bank of England forecasts that it will top out just above 13%, although a surge in gas prices in recent weeks mean officials will almost certainly have to increase that forecast. That means the ONS decision may impact the peak rate this winter, but not change the direction of the outlook for prices.

Gilts tumbled on Tuesday when UK markets reopened after a holiday, with 10-year yields hitting 2.75%, the highest since July 2014. The moves follow declines in Treasuries and German bonds on Monday, after central bankers emphasized a commitment to policy tightening at the Jackson Hole symposium over the weekend.

The ONS announcement is due at 7 a.m. London time. Inflation swap markets are anticipating that the rebate will be taken into account in inflation numbers, according to Deutsche Bank.

How the payment will be treated has “puzzled analysts and investors alike,” said Sanjay Raja, Deutsche’s chief UK economist, who is among those who expects it will be ignored when calculating inflation data. “Ultimately, it will be a judgment call.”

The ONS’s own manual says that the treatment of rebates is “not clear-cut” and decisions should be made on a case-by-base basis.

“The ONS has to weigh the different factors carefully as, ultimately, linker holders could push back against ad hoc changes countering standard practice and the broader statistical treatment of the £400 rebate,” said Morgan Stanley analysts including Theo Chapsalis. They see a high probability that the ONS will take the rebate into account.

Paul Hollingsworth, chief European economist at BNP Paribas, agrees, citing the fact that the payment is “universal, automatically-applied and directly applied to the bill.”

David Miles, who prepares macroeconomic projections at the OBR, said earlier this year that he believed the rebates would not impact inflation.

Whatever the case, the technical decision comes at a particularly sensitive time.

Consumers are increasingly worried about money, Google searches for “inflation” have soared, and the topic has been a non-stop theme in Conservative leadership hustings to determine the next prime minister.

The ONS decision could grow in importance if the rebate is increased or extended. Outgoing Prime Minister Boris Johnson said Friday that “more cash” will be allocated to support households. The campaign of Foreign Secretary Liz Truss -- the favorite to succeed Johnson -- said she’d ensure “people get the support needed.”