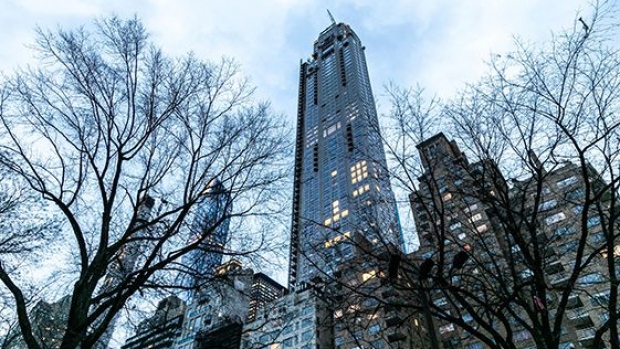 (Bloomberg) -- At the start of 2020, New York’s luxury real estate market was finally showing signs of life. There was still a large oversupply of new condos on the market, but buyer and seller expectations—never aligned in the best of circumstances— were slowly beginning to move in tandem. Manhattan sales volumes were up 13.1% year over year in the first quarter of 2020, according to a Douglas Elliman report, even as median prices declined by a modest 2.6% for the same period.

Now, more than two months into the Covid-19 pandemic shutdown, with the summer sales season looming, the industry is once again bracing itself for an uncertain market. “Prices had been falling for several years at the high end,” says Jonathan Miller, the president and chief executive officer of appraiser Miller Samuel Inc. “The question is: Will sellers and developers at the top of the market capitulate to another step-down?”

There are dozens of factors that could impact the luxury housing market. Some of the most pressing include the speed with which the city opens; the time-frame in which people in white-collar jobs are asked to return to their offices; whether or not services and stores (coffee shops, boutiques, restaurants) that make neighborhoods desirable will still exist when they do return; the strength of the stock market; the strength of the U.S. economy; the date that a vaccine becomes available; and whether the shutdown pushes New Yorkers to live in the countryside.

With no robust sales data available, the only certainty is uncertainty. “We had 20 transactions last week [ending in May 17] in new development sales,” says Shaun Osher, the founder and chief executive officer of the real estate brokerage Core NYC. “But closings don’t define where the market is right now; they define a market that’s already gone by.”

Because the spring sales season was effectively canceled, Osher says, “We have a huge pent-up inventory of product that’s going to flood the market in the next 30 to 60 days, and it will be interesting to see what that does to pricing and consumer confidence.”

People in the industry suggest that some property types could sell more easily than others.

“If a property is renovated, there’s going to be a stronger demand than something that’s not,” says Donna Olshan, president of the luxury brokerage Olshan Realty Inc. “Who wants to renovate in this environment?”

Similarly, the convenience of walking to work could take on added import. “Everyone talks about location in real estate,” Osher says. “But Brooklyn was already priced high, and I think if people see they can buy the same apartment in Manhattan and walk to work, that’s going to be a huge driving factor.”

Another major winner could be the city’s suburbs. “Look, if you love the city, but it doesn’t have schools, restaurants, broadway, sports games, museums—if all that’s not back in swing—it doesn’t look like New York anymore,” Olshan says. “Someone sitting in their apartment might decide to try the suburban experiment. And sometimes, the suburban thing works out better for people with children. It’s just the reality.”

Finally, she says that the market for one-bedroom apartments “will probably hold up pretty well, because those are not people with a big discretionary income—and very often, don’t have kids,” she explains. “They’ll make sacrifices [in living/working arrangements], because they already do make sacrifices.”

“The people who are going to get crushed are the developers,” Olshan says. “Many of them have a lot of debt and no velocity of sales. They can’t find their way out of this environment quick enough.” Some developers, she continues, “could go into foreclosure or make bulk sales.” Everyone, Olshan says, “will have to adjust to new realities.”

One of those realities might be very restrictive entry and exit rules regarding open houses. Currently, some co-ops don’t allow non-residents to enter the building. “Will buildings even allow open houses? I doubt it,” Olshan says. “Some may say they don’t want residents to show their homes at all, because they just don’t want the risk. We just don’t know. The virus controls the show.”

A further possible casualty: the borough of Brooklyn, for the same reason Manhattan real estate might become more desirable.

“Living in Brooklyn is great, but how are you going to get there if you don’t want to take the subway?” Olshan asks. “And even if you can afford a car service, that means you’re in a car for 45 minutes; would you just be better off doing the suburban experiment?”

“The first question is: How fast will sellers capitulate to the next step down in prices?” Miller says. “The second is: How long does this next step last?”

For the first time in decades, no one has a good answer. “I’ve done this for 40 years, and right now this looks like complete chaos,” says Olshan. “If I could predict the market, I would be on my yacht cruising the Mediterranean right now, so I don’t hold much stock in my predictions—or anyone else’s, for that matter.”

That said, she continues, “I think the practical thing is that if you want to live in New York City, this would be an opportunity to buy. Because I believe things will have to be at a significant discount to incentivize people to buy.”

That incentive could be sweetened by mortgage rates that have hovered near record lows. Assuming that buyers can qualify for loans—by no means guaranteed in the present market—they can take advantage of cheap money to stretch their buying power. “People are looking at [mortgage rates] and saying, this is an opportunity to buy,” Osher says.

Cash is still king. “Someone who has a pile of cash right now—who can sit and cherrypick the market—is going to do fantastically well,” Olshan says. “The people who buy in these dips always do well, but it’s a risk.”

As the market reopens, “The greatest challenge now for brokers is pricing,” says Osher. “In the best of times, it’s more art than science—and right now, we have no idea where the market is.”

The separation between sellers’ hopes and buyers’ expectations “exists in the best of markets, and it’s going to be even more pronounced now, because every buyer is going to want a deal and every seller is going to think their property is worth more.”

The reassuring news, Miller says, is that this is almost certainly a short-term issue.

“What we saw after 9/11 is that the urban-to-suburban movement lasted about three years,” he says. “Human beings have an infinite capacity to forget the recent past, and I’m very confident that skill hasn’t waned.”