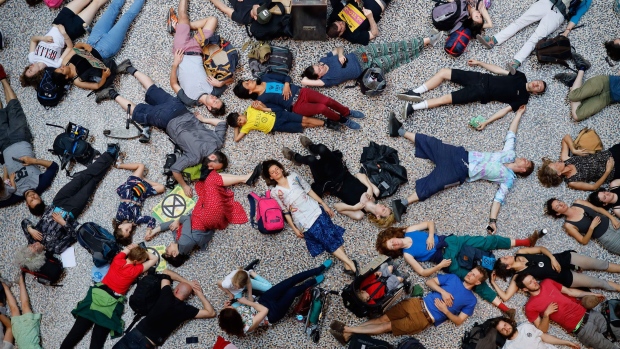 Extinction Rebellion climate change activists lie on the floor as they perform a mass "die in" in the main hall of the Natural History Museum in London on April 22, 2019. , Tolga Akmen/AFP/Getty Images

The hedge fund industry has no shortage of aggressive, in-your-face players, but few are as tough as Chris Hohn. The British billionaire takes the typical playbook to new levels—scuttling deals, pushing to remove bosses, and battering companies with litigation and threats. One opponent was so peeved after losing a boardroom battle with Hohn that he titled a book about the experience Invasion of the Locusts. That approach made Hohn’s TCI Fund Management the world’s best-performing, large hedge fund last year.

Now Hohn is bringing his hardball tactics to the fight against global warming. The money manager, with US$30 billion in assets, is pushing portfolio companies to dramatically reduce greenhouse gas emissions and disclose their carbon footprint. If they don’t, he says he’ll oust their boards or dump their shares. Just in case anyone doubts his commitment, last fall Hohn and his charity donated £200,000 (US$260,000) to Extinction Rebellion, the radical climate change movement whose members have blocked traffic in London and glued themselves to jetliners.

“In the war against fossil fuels, you can’t be super-picky about your allies,” says Jeremy Grantham, co-founder of Boston money manager GMO, a legendary investor who has long warned of climate catastrophe. Hohn “has shown you can make a big impact on companies with a lot of arm-twisting.”

For Hohn, 53, a cerebral and deeply private financier who’s worth $2 billion, his campaign is just a first step in shaking up an asset management industry he says has ignored a planetary crisis. He’s calling on investors to fire money managers who don’t press companies to reduce their carbon footprint, and he wants banks to stop lending to companies that ignore climate change.

Still, for all of Hohn’s zeal, his crusade is fraught with the inconsistencies of green investing. TCI once held a big stake in an Indian coal producer; even now, it owns shares in three railroads that burn tons of diesel and ship fossil fuels, including from oil sands, one of the worst sources of greenhouse gases. Another key holding: Ferrovial SA, the Madrid-based conglomerate that runs airports that include London’s Heathrow.

“On the one hand, he’s trying to be green—and on the other, he makes money out of polluters,” says Jacob Schmidt, chief executive officer of Schmidt Research Partners, a London investment firm. “The question is, how committed are you in actually following your principles?”

Hohn says it’s far more productive to engage with carbon-heavy companies than to ignore them. On Nov. 30, TCI sent letters to the CEOs of the 17 companies in his portfolio with specific instructions on shortcomings that must be fixed. TCI said it will vote against directors of companies that don’t hit its targets, as well as auditors who fail to report “material climate risks,” and it may even sell all its shares in a company.

In a letter to Ferrovial, Hohn acknowledged that “de-carbonizing” airports is a massive challenge and lauded the company’s A grade for disclosing its greenhouse gas emissions. Yet TCI said Ferrovial’s target of cutting emissions almost a third by 2030 could be increased, and he called on the company to support measures such as a carbon tax and a mandate that airlines shift to greener jet fuel.

He told Canadian Pacific Railway Ltd. that its method of disclosing emissions got a C grade by the nonprofit Carbon Disclosure Project, and that its plan to boost that to a B would still be “unsatisfactory.” TCI, the railroad’s No. 1 stockholder, with an 8 per cent stake, said it requires the company to have a “credible, publicly-disclosed plan” to reduce emissions that meets seven objectives, including offsetting emissions from corporate travel and making facilities more energy efficient. Canadian Pacific says it engages in dialogue with stockholders on topics including sustainability, and that it has long reported its emissions to improve its practices. Hohn declined to be interviewed for this story.

Hohn launched TCI and an affiliated charity, the Children’s Investment Fund Foundation, in 2004 after earning a reputation as a gifted stockpicker in the London office of Perry Capital, a New York-based hedge fund. His wife, Jamie Cooper, whom Hohn met at Harvard in the early ‘90s, ran the foundation, and they became a London power couple as TCI pumped money into the charity.

Thanks to Hohn, the foundation has $5.1 billion that it uses to fund programs such as strengthening nutrition for youngsters in deprived communities, protecting adolescents from slavery and human trafficking, and expanding pediatric HIV treatment in Africa. Hohn and Cooper regularly traded notes with Bill and Melinda Gates, and in 2012, David Cameron, then Britain’s prime minister, invited Hohn to speak at a summit on malnutrition at No. 10 Downing Street.

At TCI, the vibe was decidedly more mercenary. Hohn developed an investment strategy predicated on his own “personal, intellectual, and emotional makeup,” as he put it to Justice Jennifer Roberts, who presided over his 2014 divorce, which resulted in a £337 million settlement for Cooper. Hohn’s approach meant conducting meticulous analysis and searching for weak management teams that other investors avoid. “Think of it like the damaged goods department of a department store where you can get 80 to 90 per cent off because most people won’t buy,” Hohn said in a video interview with Institutional Investor magazine in 2013.

When he settles on a target, Hohn takes highly concentrated stakes; a single stock can account for more than 15% of his portfolio. Then he goes to work agitating for changes in the company’s strategy. In 2005, he took a sizable stake in Deutsche Boerse in Frankfurt to stop what he called a “value-destructive acquisition” of the London Stock Exchange. Rebuffed, he called on shareholders to remove CEO Werner Seifert and kill the deal. The board acquiesced, and after Seifert left the company, he characterized Hohn and other shareholder activists as locusts.

Hohn was the catalyst for one of the most disastrous banking deals in memory. In 2007, TCI bought 1% of ABN Amro and started calling for a sale of the Dutch lender. After stockholders supported TCI, ABN Amro was sold to a consortium led by Royal Bank of Scotland Group in the biggest European banking merger ever. TCI pocketed $1 billion, but the global financial crash of 2008 poleaxed the newly combined institution and led to its nationalization by the British government.

TCI has also exploited scandals such as the 2011 crisis at Rupert Murdoch’s News Corp. The company’s U.K. newspapers had hacked mobile telephones and voice mail accounts of celebrities, royals, and a murdered 13-year-old girl. As the media giant’s stock plunged, Hohn purchased almost $1 billion in shares. After News Corp. settled lawsuits in the affair, Murdoch bought back shares and broke up the company. The stock rallied over the next two years, earning a 57 per cent return for TCI—and, for Hohn, reinforcing his reputation as a gifted money manager.

Yet he has suffered defeats that show the limitations of his activism. In 2012, TCI sought to force Coal India, a state-controlled producer, to boost dividends and stop selling super-cheap coal to nearby power plants. But the government had little interest in seeing energy prices rise; in 2014, TCI gave up and bailed out of the stock, which had fallen 19% during the campaign. Four years later, the London Stock Exchange Group Plc spurned Hohn’s demands to oust its chairman and renew the CEO’s contract. After that effort was rebuffed, TCI sold most of its 5% stake in the company, only to see its shares almost double the following year.

Hohn is rolling out his green efforts as the asset management industry struggles to find a way to address climate change while delivering the kind of returns investors demand. Index fund giants have long used an investing style dubbed ESG—based on environmental, social, and governance criteria—but they maintain that investment stewardship is ultimately about maximizing value, not imposing social “values” on companies.

But amid mounting anxiety about record-breaking global temperatures, Larry Fink, chief executive officer of BlackRock Inc., acknowledged on Jan. 14 that climate change has become a “defining factor” in the long-term prospects of companies worldwide. BlackRock, the world’s biggest investment firm, with $7.4 trillion in assets, will start cashing out of firms with “high sustainability-related risk” and plans to make emissions a fundamental consideration in investments.

Tackling global warming will test Hohn’s approach as never before. First, he’s betting that companies will heed his demands, and then that he won’t dampen returns by destabilizing companies that reject them. In tying TCI’s fortunes to a climate change agenda, Hohn is wagering that the economic risks from the mounting crisis are so great that it would be foolish not to spur companies to get real on emissions.

“Green investing and hedge funds are not terms many investors would put in the same sentence,” says Marc de Kloe, a partner at Theta Capital Management in Amsterdam and an investor in TCI’s fund. “However, we have been proponents of the idea that hedge funds are in some way best suited to implement strong green policies, given their unconstrained nature and ability to deploy activist tactics.”

Climate change activists say it’s about time, given the confusion around ESG, which has become a megatrend in the investing world. More than $30 trillion was held in assets classified as sustainable or green in 2018, up more than a third from 2016, according to the Global Sustainable Investment Alliance, a group that tracks money flows.

But critics contend that ESG is often little more than a public relations gimmick to “greenwash” a firm’s credentials. There’s no standard definition of ESG, so it’s virtually impossible to compare companies against a universal benchmark. Moreover, subscribing to the approach doesn’t mean institutional investors will actually pressure portfolio companies to reduce emissions. In November, ShareAction, an advocacy group in London, released a study finding that Capital Group, T. Rowe Price, and BlackRock supported fewer than 7 per cent of the shareholder resolutions on climate risks in 2017 and 2018, even though they all subscribe to ESG.

While it might be odd to look to hedge funds for support in the fight against climate change, that’s where the story is going, says Catherine Howarth, CEO of ShareAction. “Historically, large institutional investors have encouraged companies to do the right thing in vague, bland terms, and the whole asset management field is finally waking up,” Howarth says. “Now we need activist investors like Chris Hohn to push like crazy for what they want.”

--With assistance from Jeremy Hodges.