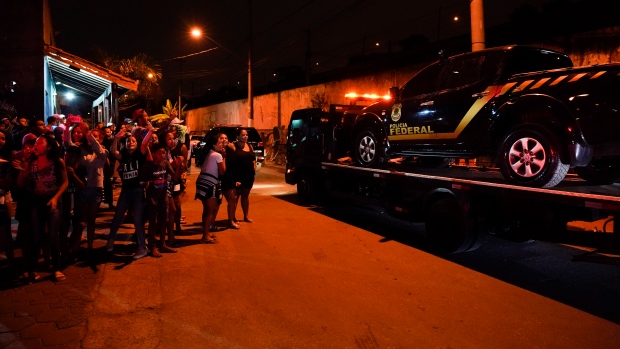 People watch as a fake police truck that was used in robbery is transported on a flat-bed truck in the outskirts of Sao Paulo, Brazil, Thursday, July 25, 2019. Authorities at Sao Paulo's Guarulhos international airport say eight armed men raided a terminal and escaped with some 750 kilos of gold. , AP Photo/Victor R. Caivano

GRU Airport, which holds the Guarulhos operation concession, said the thieves hauled away gold destined for Zurich and New York by using two cars that looked like police patrol vehicles. They also dressed as officers, covered their faces and carried long weapons before making their getaway, according to security camera footage shown on Globo TV.

The television outlet said the vehicles were later abandoned in Jardim Pantanal, a neighbourhood located 20 kilometres (12 miles) from the airport.

The operator said there were no shootings or injuries during the assault.

But a police officer said an airport official and eight members of his extended family, including four minors, had been kidnapped for 12 hours. They were expected to give testimony in the next few hours, he added.

The officer requested anonymity because he was not authorized to speak to the press.

Sao Paulo police said they had reinforced surveillance around the area and were searching for the stolen cargo.