Fully sufficient self-driving trucks could be hitting the highways by 2024: Embark CEO

Alex Rodrigues knows all about automation.

It’s a fascination that began back when he was a kid in suburban Alberta, building his own working robot in the seventh grade.

Just under a decade later in 2016, after several software stints and dropping out of the engineering program at University of Waterloo, he founded his own automation company that specializes in self-driving trucks.

On Thursday, that company — Embark Trucks Inc., based out of San Francisco — started trading on the Nasdaq. It’s now made the 26-year-old Canadian one of the youngest heads of a publicly-held business, valued at about US$5 billion.

Palo Alto-based venture capital firm DCVC Management LLC holds an almost 17 per cent stake in Embark — worth about US$630 million. And that firm has kept upping their money towards Embark round after round with every proceeding series of funding. Other major investors include Sequoia Capital, Tiger Global and Y Combinator.

Now, at the heart of Embark’s big pitch to public investors starting this week is a potential solution for major issues inundating the North American trucking industry and affecting global transport systems. 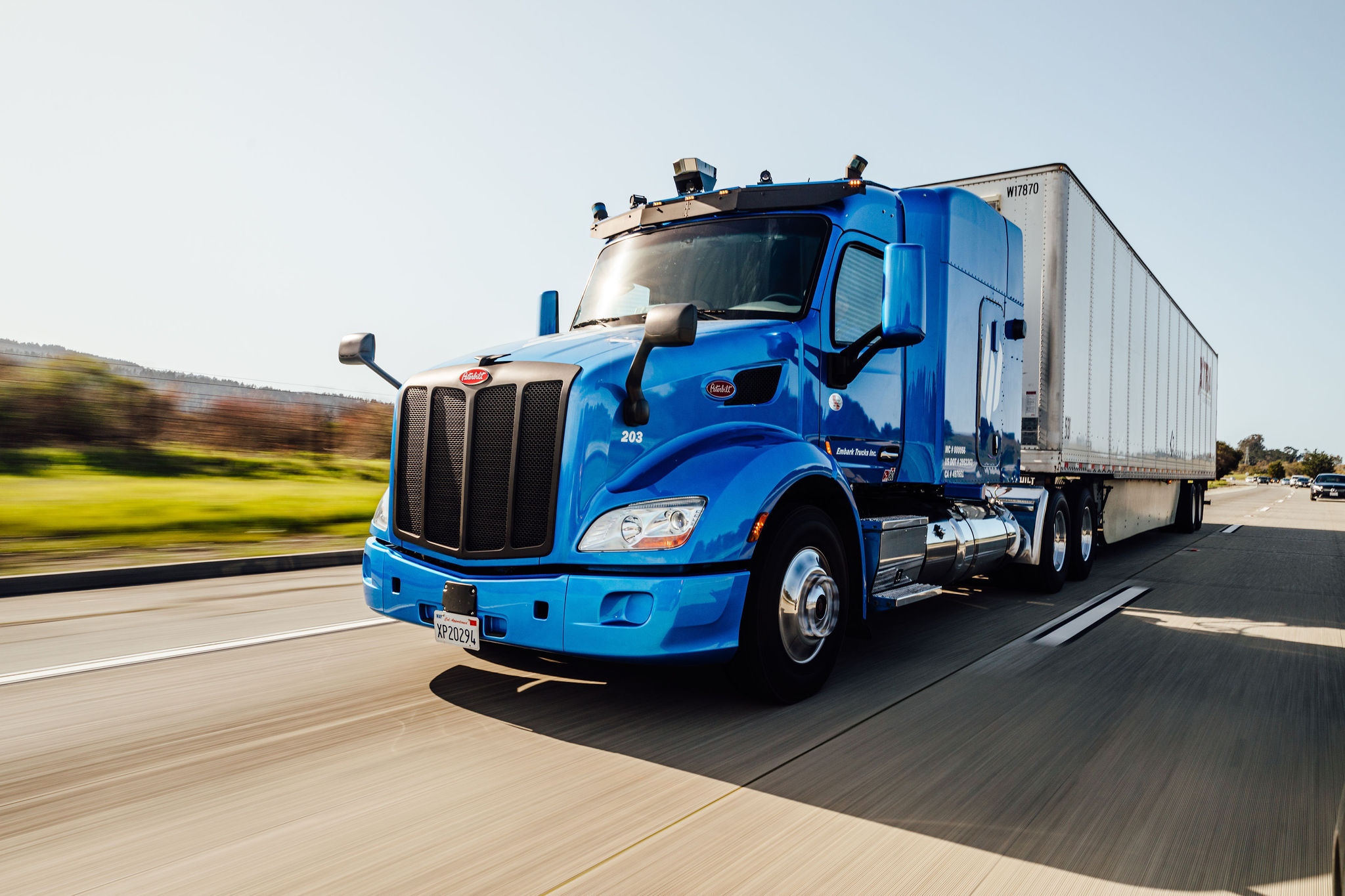 Rodrigues believes much of the supply chain conundrums and labour shortages in the sector, that have only grown more dire during the pandemic, will be alleviated with self-driving trucks.

And he said what separates his company from all the others is that Embark started that conversation first. “We were looking at the trucking sector in this way when no one else was,” Rodrigues said in an interview.

“I definitely think it’s a really big, important step. And I really believe our technology and digitization in general is going to revolutionize the trucking sector seen all over the world.”

COMPANY YET TO EMBARK REVENUE

Embark’s technology is inherently designed for long-haul trips like highways. That distinguishes the company from others too, Rodrigues said, “because we’re building a system that’s a lot simpler and is clearly much safer in that way — you’re passing it off to a human for the last bit of the journey.”

The idea being that while Uber, Google parent Alphabet’s Waymo or General Motors' Cruise have been busy with robotic taxis and figuring out self-driving vehicles within congested cities, Embark looked at the places where those road obstacles aren’t much of a problem.

“Our focus makes us more scalable and therefore more commercial,” Rodrigues said. A fruit for that focused labour, however, has yet to be seen.

While Embark is forecasting sales of US$867 million in 2024 and US$2.77 billion in 2025, it has yet to generate revenue. The company lost US$21.5 million last year, according to a securities filing obtained by Bloomberg.

And shares for the company have been lukewarm at best during early trading Thursday, falling 7.3 per cent in the first minute.

Embark is now a public company trading on @Nasdaq under the symbol $EMBK.

We’re thrilled to begin this next chapter as we continue to pursue our mission of making the trucking industry safer, more efficient, and more sustainable.https://t.co/sQKyPgXOjc

In comparison, San Diego-based TuSimple Holdings Inc. — which became the world’s first autonomous-driving company to go public in April — is now trading below their $40 IPO price as well.

Additionally, Aurora Innovation Inc. in Silicon Valley — the second autonomous trucking company that began trading on the Nasdaq as of last week — also lost $214 million across 2020 and has yet to generate revenue.

Bednar and others are not entirely sure self-driving trucks are the solution they’re being made out to be by companies like Embark.

“I’m worried about who will be left behind when suddenly all those jobs that made the trucking industry work don’t exist anymore. Who’s going to be responsible for them?” said Bednar, who’s held several public and private sector policy roles, including at Airbnb and Queen’s Park in Toronto.

“You have to remember those truck drivers are the people that informed the very algorithms which are now allowing this type of technology to enter the markets.”

And then there’s the issue of regulatory hurdles, Bednar said. “As it stands, we don’t have appropriate or comprehensive legislation to allow autonomous driving in Canada — in any single province or the country as a whole,” she added.

While Embark has yet to reveal plans for a Canadian expansion and is only putting out trucks on U.S. highways at the moment, Rodrigues said he looks forward to hopefully being able to work with the governments in his home country in the future.

And he insists jobs won’t be lost with self-driving trucks. “If anything, more will be created,” he said.

“I don’t suspect anyone who is in the sector right now will have to leave for the rest of their careers… It’s all about adapting and making sure the industry is functioning in the best way possible. And to me, that’s automation.”