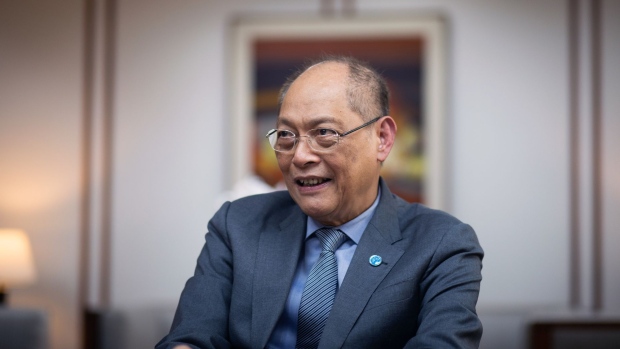 Benjamin Diokno, governor of the Bangko Sentral ng Pilipinas (BSP), speaks during an interview in Manila, the Philippines, on Wednesday, Feb. 5, 2020. Diokno said it would be better to cut interest rates sooner than later, a signal that policy makers will likely lower borrowing costs Thursday. , Bloomberg

“As a result of increasing inflation pressures, a number of central banks in the world have started to raise interest rates. Many have decided to wait,” Diokno wrote in a mobile-phone chat with reporters on Sunday. With the Philippine economy at a nascent stage of economic recovery, the governor said he sees the harm of tightening monetary policy too soon exceeding that of moving too late.

Inflation pressures are supply-driven and raising interest rates won’t, for instance, boost the supply of crude oil, so “there appears to be no justification for monetary intervention,” Diokno said. The central bank “will decide on the appropriate timing of its policy change” and won’t be influenced by opinion makers, market analysts or the social media, he said.

Diokno said the central bank staff’s latest forecast for average inflation this year is about 4.5%. While that’s higher than the 2%-4% target over the next few years, the pace of increase is expected to ease to an average of 3.3% in 2022 and 3.2% in 2023, Diokno said. The latest estimate for 2021 is higher than the 4.4% projection that the central bank gave on Sept. 23.

The risk to the outlook appears “to be on the upside over the near term,” but broadly balanced for 2022 and 2023, Diokno said, citing the potential impact of weather on food costs, as well as rising commodity prices because of demand and supply chain bottlenecks. The governor said the prolonged impact of the pandemic on domestic growth and a weaker-than-expected global recovery could counter those price risks.

“There is no pressure on the demand side, such as increases in wages, transport costs, and housing,” he said. “There is sufficient slack in the economy and real estate prices are steady with downward bias.” The central bank will next decide on monetary policy on Nov. 18, just over a week after the third-quarter economic report is released.