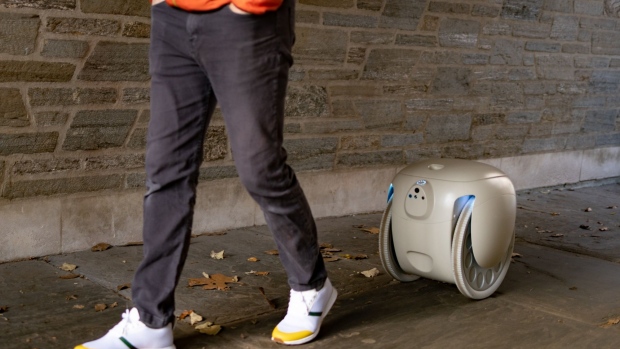 The Gitamini ”follow” robot has a cargo hold that allows its users to walk further without having to carry heavy items. , Photographer: Hannah Beier/Bloomberg

(Bloomberg) -- When my six-year-old son first “woke up” the Gitamini robot, I was surprised he didn’t flinch — robots these days tend to be ominous. But as November leaves swirled around the sidewalk meet-cute, the squat personal droid gave a friendly “chirp” and popped up on its two large wheels, ready to follow a new friend.The three of us were walking to a bookstore across Princeton University’s campus, and I charged my son with loading up the robot. Pokemon cards, snacks and non-negotiable stuffed animals were crammed into the Gitamini’s hollow center cavity. As we set off, with the cream-colored droid following about six feet behind, my son glanced back to monitor Gitamini’s loyalty, occasionally prodding it with a “C’mon.” An hour later, the snacks and stuffed animals had company: a handful of new books and a pile of leaves deemed too beautiful to leave behind.

Service robots are now an $11 billion industry, according to the International Federation of Robotics, with nearly 200 new fleets launched during the pandemic. Most of those bots are in hospitals — assisting in surgery, for example — and many can be found trundling around warehouses and factories. But Gitamini wasn’t designed to pack boxes, pick oranges or strip minerals from treacherous mines. It has a more straightforward mission: to forestall short car trips. Americans make nearly four such trips per day on average, according to government statistics, and 35% of them are less than two miles.

Gita — Italian for “trip” — hopes to be a 28-pound solution to a 5,000-pound problem. “These trips are totally walkable, but nobody’s walking two miles with a bag of dog food,” says Greg Lynn, chief executive officer of Gitamini-maker Piaggio Fast Forward. “We definitely want to be part of the ecosystem where you don’t have to take a two-ton thing to carry two bags of stuff.”

Trace the Gita family tree back a few generations and one arrives at the Vespa. Seven years ago, Italian conglomerate Piaggio & C SpA was looking for a product to crack the American market, where its Vespa bikes hadn’t fully caught on. The company opened a research lab in Boston dubbed Piaggio Fast Forward and charged it with cooking up a micromobility solution that would play in the US.

A residential flight to urban exurbs and walkable suburbs, combined with the nascent work-from-home movement, had theoretically primed the market for Star Wars-style assistants. From its Boston skunkworks, full of architects and urban planners, Piaggio in 2019 launched the first Gita, essentially a larger version of the Gitamini. But at $3,250, market reception from early customers was muted, and the feedback was focused: Make a smaller one.

Gitamini ($1,850) rolled out in September 2021, slight enough for a person to carry up a flight of stairs and designed to travel anywhere a wheelchair might, including ramps and elevators. The machine pairs to its chaperone using two cameras and depth-sensing radar, which profile the silhouette and clothing of whoever stands in front of it and pushes the “wake up” button.

Once underway, Gitamini zips up to 6 miles per hour, carries up to 20 pounds and can cover 21 miles on a charge. At 1,000 cubic inches, its cargo hold can swallow a 12-pack with some room to spare, and the bot can handle “moderately uneven” surfaces like gravel and grass, though sand and snow are still a bridge too far. The Gitamini has even figured out doors — Piaggio engineers programmed it to scoot through and wait for its human partner on the other side — and it knows to park (with a sad robot moan) if it loses its minder.

At the Linden apartment complex in Chapel Hill, North Carolina, a Gitamini serves as both bartender and boombox for leasing consultant Jasmine Mangal, who says the robot’s bluetooth speaker is surprisingly good. The Gita, which the complex was invited to beta test for Piaggio, also schleps Amazon packages for Mangal, and helps draw interest when she sets up a table at University of North Carolina housing fairs.

“It’s a great icebreaker,” she says. “The only thing is sometimes the speed kind of freaks me out; when it’s coming up on me I find myself thinking ‘Is it going to stop?’”

In a world fast-filling with sentient droids, robots like Gita — designed to work with a human, not replace one — represent a small but growing slice of the market. This year, the International Federation of Robotics expects people to buy about 45 million droids for personal service or entertainment, a 25% increase over 2021.

“All these companies are condensing autonomy into smaller and lower-cost platforms,” says Angus Pacala, CEO of Ouster Inc., which makes LIDAR scanning sensors. While research and development for LIDAR — essentially a laser form of radar that maps surrounding obstacles — has been fueled by self-driving car projects, Pacala says almost 40% of Ouster revenue now comes from robot-makers.

But “follower” bots, which trail behind their owners and even come in suitcase form, remain far from commonplace. While Lynn says Fast Forward sales have consistently tripled year over year, Piaggio does not disclose specifics. The droid has only been purchased in “over half” of US states, according to the company, mostly in the South where weather is more robot-friendly. At this point, it’s safe to say Gitamini adoption is more Segway than iPhone. The humble granny cart, though not hands-free, remains largely undisrupted.

Liz Gillespie is the kind of customer Piaggio wants to win over. Since moving from the Atlanta suburbs to its center in 2015 — an end-run around the city’s notorious traffic — she now walks about five miles a day, often with her Gitamini in tow. The droid gamely schleps Gillespie’s Whole Foods hauls and serves as a wine caddy for art walks with her friends.

“Everyone wants to talk about it,” she says. “It’s like having the cutest dog at the dog park.”

Indeed, every time Piaggio ships a robot to a new city, it sees a cluster of orders, ostensibly from pedestrians who saw the bot in the wild and want one of their own. But Lynn concedes Gitamini has yet to truly take over a city or neighborhood.

Many of the world’s robots got their start at Carnegie Mellon University, where people like Gabriel Goldman, a senior commercialization specialist, try to close the gap between vanguard engineering and actual revenue. Goldman says much of his time is spent convincing potential partners that “small, progressive gains towards a realistic solution” make more sense than expensive autonomous robots. “There’s a huge benefit to just augmenting what an operator can do,” he says.

Still, Goldman doesn’t expect machines like Gita to be ubiquitous for another decade or so, simply because it still costs too much to make a truly killer version — one that can climb stairs, for example, or follow its owner through a whiteout blizzard.

“It’s all those edge cases that are probably holding them back a little,” he explains. “For most consumer-grade robotics right now, the price point that actually makes it achievable from a market standpoint really limits the ability of what it can actually do.”

And there is still a fair bit that Gita can’t do. Walking indoors with a Gita is a little bit like trailing something on a string; round a corner too sharply and the robot will thunk into the wall. What’s more, the cargo hold doesn’t lock and the bot’s cameras are happy to pair with anyone who wakes it up. Gitamini has also occasionally struggled to operate in bright, glaring sunlight. LIDAR sensors would help solve that problem, but they’d also make for a much more expensive machine.

Still, the Gitamini is great at carrying stuff, a skillset for which there’s nearly endless demand. Already, Piaggio Fast Forward is pivoting its bots from the general consumer market to more commercial customers. In September, it unveiled a larger machine, the Gitaplus, that will carry up to 40 pounds in a cavity roughly 2 feet high, wide and deep. Lynn wants to see the supersized Gita on construction sites and at hotels — anywhere one might see a cart or trolley. The company also rolled out a software package that would allow someone to manage a fleet of robots, stringing them in a caravan behind a single worker or along a predetermined route.

“The addressable markets there are really big,” Lynn says. “We’re not giving up on consumers, it’s just a longer road there to normalize the product.”

For a six-year-old, normalization takes about five minutes. As we made our way across campus, my son tumbled the Gitamini off of a couple of curbs, boosted it over stairs and stopped it often to add to his leaf stash. Everywhere he went, the robot followed him and a parade of gobsmacked pedestrians followed the robot.

Gita, it appears, is working — but it also has a lot more work to do.